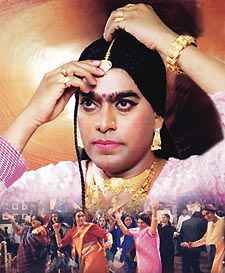 IN THE COURSE of its two-and-a-half hours, Shabnam Mausi offers a mixed bag — possibly one of the most mixed-up bags in existence, actually. There are hermaphrodites, referred to as ”eunuchs” in the Indian vernacular. Dancing and singing ensue, as do quaint martial-arts fight scenes, complete with those dubbed-in ”whack” noises that made Bruce Lee famous. There is life and death, pageantry and politics in this epic-length tale based on the real-life woman of the movie’s title.

The non-fiction Shabnam Mausi fought against the cultural exclusion faced by India’s hermaphrodite community, and became an elected and beloved legislator. Whether she did it with as many songs as her celluloid namesake is anyone’s guess. One can hope there were certainly fewer deaths than are presented on-screen.

Despite its out-of-synch subtitles and meandering storyline, this colorful jumble does offer two particularly scarce gems for Reel Affirmations audiences. First, when’s the last time anyone saw a reality-based film about a transgender politician? Second, with many foreign films being made with an eye to getting an American release, Shabnam is an undeniably home-grown delicacy. If anyone in ”Bollywood” thought for a second that this film would be showing stateside, they likely would’ve spent more time on the subtitle translations. After all, ”I wanted to keep a gold coin on your broken fate line,” may mean an awful lot in Hindi, but it’s not going to mean much at the E Street Cinema. Such is the price of authenticity.

The recommendation is to check out Shabnam Mausi, with a few conditions. Stop into the downtown Bombay Club’s bar for a couple Kingfisher beers to help keep you fixated on the screen. While you’re there, make a reservation for dinner after the movie as a reward for your diligence. And, most importantly, try to find someone familiar with Indian metaphors to come along and help you understand the importance of the dramatically delivered: ”Where there are no bones, dogs do not wag their tails; they lift their legs.” — WOB