Home / Special Feature / Reel Affirmations / Men Shorts: Who Do You Think I Am?

Men Shorts: Who Do You Think I Am?

) isn’t just one the best titles of the year, it’s one of the funniest films you’ll see. A French couple has decided it’s time to have their male cat fixed, but the husband is having difficulty taking such an emasculating step. So, he embarks on a search for knowledge that includes castrati CDs, gay cruising parks and sex-change surgery centers. It’s so incredibly absurd that it becomes side-splittingly funny.

Also from France is A Hard Blow (

), an amusingly forgettable story of a woman who thinks she’s being romanced by her stylish male neighbor, but is asked for a strange favor, instead.

Much closer to home is Mistaken Identity (

) from Sarah Kellogg (former head of the Reel Affirmations festival) and Deb Griffin. Their first film follows a straight Hoosier couple whose D.C. vacation turns bad when they get arrested during a drag catfight at the Pride festival. Sharing a paddy-wagon with a gaggle of gays and lesbians, everyone learns a little something. Not a bad first effort. 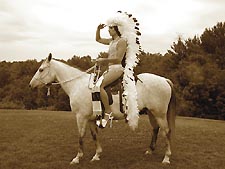 ) is as bleak as its frozen Finnish landscape, where a middle-aged man who long ago left his family nervously awaits a man who responded to his personal ad. He doesn’t know that his long-lost son is on his way for a surprise reunion. There’s a lot of story between the lines, almost all of it sad.

At the far end of the spectrum is Available Men (

) yet another in a long line of cinematic solipsisms that prove Hollywood’s endless fascination with itself. Adding a gay twist to the formula doesn’t make it any fresher. Then there’s Group of Seven Inches (

), where the simple fact that a native-American-garbed, horseback-riding drag queen goes by the name Miss Chief Eagle Testickle pretty much tells you everything you need to know — none of it good. — SB

Men Shorts: Who Do You Think I Am?