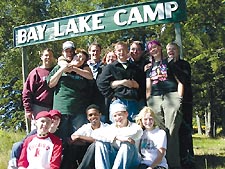 DIFFERENT DEMOGRAPHICS will likely have very different reactions to Camp Out, a documentary about a summer camp for gay, Christian teens. Young people will likely feel a great affinity for the kids featured in the film, as they are not — for the most part — dogmatic drones. Rather, filmmakers Larry Grimaldi and Kirk Marcolina have captured most of the angles of these interesting, likable kids. Audiences of a particularly spiritual stripe, of any age, will appreciate the earnestness of these kids' exploration of their relationships with God.

Even the older atheists and agnostics will find something with which to relate, even if it's simply the embarrassment of teen awkwardness. The morbid poetry, black fingernail polish and ”truth-or-dare” backlash piety — ”I wanted to come to a place where stuff mattered!” — will leave quite a few elders squirming in their seats, recognizing their former lack of sophistication. It's all here. 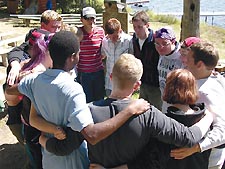 Actually, Grimaldi and Marcolina are exploring unique territory. This summer camp in Minnesota is the first of its kind, and this batch of kids from 2004 were its first campers. It's amazing that considering their ages, parental concerns and the intimacy of faith, the kids had little trouble opening up for the film. Having hardly known a world without MTV's The Real World, these kids knew their way around a video diary. And they seemed not at all inhibited by the filmmakers' presence, to Marcolina's and Grimaldi's credit. The result is a sweet summer snapshot of youth, as these 10 teens evolve into their identities as adults, morphing from sexless to gay, from childish notions of a two-dimensional God to a full gamut of spiritual awakenings. (Stay through the end credits if you want to see who's gone Wiccan!)

Sadly, with so much territory to cover, Camp Out‘s 78 minutes don't allow the exploration to go as deep as it could. That may be a godsend for people who don't like spending much time in a theater seat, but brevity means that the kids who apparently crave attention completely overshadow the quieter kids, who are left as background. Whether that's the fault of the filmmakers or of teen reticence is a mystery, but it does leave viewers wondering about those who ended up with little face time. — WOB