GAS ASSUMES THAT everyone's seen — or at least recognizes — Stanley Kubrick's classic of artistic violence, A Clockwork Orange. In fact, it wears the allusions on its work-suited sleeve, at one point having one of the psychotic rampaging youths break into an a cappella version of ”Singing in the Rain” as he tortures a middle-aged victim. But such blatant name-checking with an acknowledged masterpiece sets Gas up for an artistic burden it can't quite carry.

At the heart of the film's jumbled chronology is Luca, a young man with some identity issues. He's the one who's brought a pack of feral youths and their middle-aged prey into a deserted industrial lair reminiscent of the dark and depraved setting of Hostel. But there's more to Luca than meth-fueled ultraviolence with his droogs. The conflicted Luca has dumped his girlfriend and begun a clandestine dalliance with her brother. And as Gas jumps backward and forward in its timeline, an unseen moment of violence has set Luca on his own violent course. 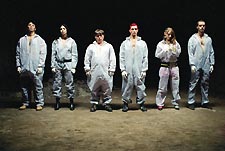 As Luca's story unfolds, so do the stories of his brutal companions. Nothing particularly explains why any of them go on to become, say, a coprophiliac fagbasher, and some are more interesting than others. After a while they begin to drag the movie down, spending too much time on impenetrable motivations.

Luca's story is compelling however, although the mystery of the violence in his past is not that much of an actual mystery, leaving Gas as more of a question of ”how” rather than ”why.” While that may rob Gas of some its emotional impact, it remains a fascinating, if flawed, look at the psychosis of violence and loss. — SB 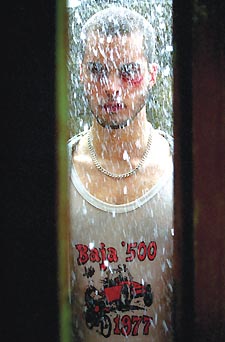