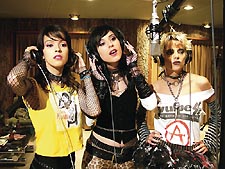 EL CALENTITO IS Chus Gutierrez's ode to the punk revolution amid Spain's troubled transition to democracy in the early 1980s. What's most amazing about El Calentito is that it starts off so far away from politics, disguising itself as a farcical romp with an almost American Pie-like sense of humor, focused on the efforts of a perfectly middle-class nice girl, Sara (Veronica Sanchez), to sneak out of her parents' house and lose her virginity.

In a series of humorous twists and turns, Sara ends up not losing her virginity, getting wasted, and waking up the next day with a new set of friends: the girls in punk rock group Las Siux. In need of a new lead singer, Las Siux recruit Sara to interest a record label executive to consider signing their band. The newly reconstituted group have 10 days to get their act together before performing for the executive at El Calentito. Sara has 10 days to remake herself in all her punk glory, hopefully lose her virginity, and keep her ultra-fascist mother from finding out her daughter's going radical right under her nose. 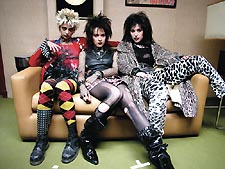 In the midst of Sara's personal revolution all hell breaks loose. Her best friend falls for her bandmate and comes out as a lesbian, Las Siux's former lead singer tries to sabotage the band's record deal, and El Calentito's trannie owner and chief social outcast dukes it out with the fascists who live above the bar. Then the other shoe drop when Spain's military attempts a coup, and suddenly, seamlessly, El Calentito‘s farcical romp grows just the tiniest set of teeth. Punk and democratic ideals of freedom get very concrete as martial law is declared, a curfew is enacted, and gatherings of more than four people are banned. How Sara and her friends handle the sudden threat to Spain's democratization and their big gig at El Calentito is a gratifying blend of aplomb and wackiness.

), a five-minute, pop-trashy music-video-inspired film in which a family stares at a revolving ”living” exhibit featuring a ”robotic” woman in many womanly guises. Electro-poppy poop. — NL