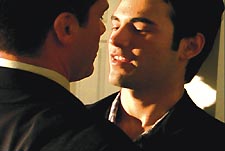 FOR ALL THE talk of the gay civil-rights struggle being the same as the one for racial equality, gays sure do ”pioneer” a lot of neighborhoods and, ultimately, displace a lot of people. East Side Story dissects that dilemma with aplomb, surveying the distance between gays and Hispanics (and gay Hispanics, and gay whites, and straight Hispanics, and evil queens on all sides) in a gentrifying section of East L.A.

Diego is a barely closeted waiter in a homophobic, racially defensive neighborhood. His new neighbors, Wes and Jonathan, are a prim little pair of gringo interlopers whose house (or, as Jonathan calls it, their ”investment”) has ticked off the locals. But when Wes decides he wants to stay in the neighborhood rather than resell — in part because of puppy-eyed Diego — his already improbable relationship with Jonathan hits the skids. Before the whole beautiful disaster shakes out, Diego will learn how the gentrification he's ushering into the area helps him as a homo even while it hurts him as Latino.

Writer/director Carlos Portugal juggles a complex narrative with ease, tossing in engaging subplots the same way Diego's grandmother tosses poblanos into chili. Gentrification is a topic that we gays don't raise too often, perhaps because if we did, we'd still be holed up on P Street and soul food would still be easily found on 14th. But gentrification is a key interaction that the gay community has with the world, as well as one big gap in our bridge to other minorities. It's worth exploring, and this film does so with knowing precision.

Even if it were flawed, East Side Story would be a must-see for any gay person who's moved into a neighborhood and waited for the antique shops to arrive. But this is the whole enchilada: a funny, lively look at a bustling neighborhood that's only being ”discovered” insofar as Columbus discovered America. — WD