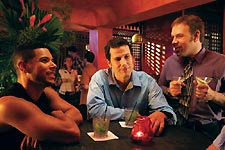 THE PROBLEM WITH Coffee Date is that it's a romantic comedy that is neither. The film barely amounts to a collection of tired clichés and hackneyed premises that fail on every level to give it even a glimmer of verve.

The movie centers around heterosexual Todd Muller, as bland as the movie, who through a mishap in Internet dating – his oafish brother, Barry, sets him up with a dude in the M4M chat room – ends up on a coffee date with Kelly (played by the seriously under-used Wilson Cruz).

To get even with his brother, Todd (played by Jonathan Bray) and Kelly pretend to have a wild romp in the bedroom as Barry listens in horror. The practical joke turns into more than Todd bargained for when Barry calls their mom (Sally Kirkland) and others begin to find out. Events are complicated when Todd and Kelly's friendship deepens over a shared love of movies, and Todd is forced to swear up and down to friends, family, coworkers — and even himself — that he is definitely not gay.

Although the film flirts with the idea of seriously weighing the questions of sexual identity — can a straight guy fall for a gay guy? — it lacks the moxie to do so and too often ends up taking the low road and going for cheap yucks. The result is tedious and the viewing experience virtually joyless.

If Coffee Date has a silver lining, it's the presence of Wilson Cruz, who was endlessly amazing in ABC's My So-Called Life and later projects. Watching him on screen next to Bray is a bit embarrassing because Cruz clearly acts circles around him. Also fun were the film's two surprise performances: Jonathan Silverman as brother Barry and Deborah Gibson (that's Debbie to me and you) as the sexy, straight-gal coworker.

Gimmicks aside, however, Coffee Date fails to offer anything of serious interest. Had the characters been more likable, the jokes funnier, the plot more stimulating, it could have worked. But as the old cliché goes: I'll be washing my hair the night of its screening. — DO