By Metro Weekly Contributor on October 21, 2006 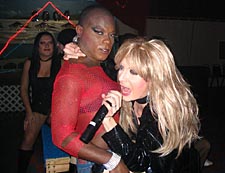 WHILE VISITING southern Virginia, I once watched a drag show at a windowless gay bar called Ambush that was sandwiched in a run-down minimall between a laundromat and a pizza shop. Such off-the-map watering holes are the subject of Malcolm Ingram’s Small Town Gay Bar, outposts of queerness in the militantly heterosexual Deep South.

The bars themselves are the stars of the documentary, some of them literally just shacks on dirt roads that you’d never have noticed if not for the rainbow windsock dangling from the roofline gutter. From the outside, they’re creepy and intriguing, and Ingram’s camera has the affect of making you feel as though you’re a deep-sea diver who’s stumbled upon the wreckage of a sunken ship. On the inside, they’re a ruckus of disco balls, strobe lights and loud dance music.

The problem with most documentaries like this, of course, is that they quickly devolve into condescension. American Movie, Bright Leaves, and even the fabulous Grizzly Man all smacked of a joint chuckle between the filmmaker and his sophisticated urban audience. But Small Town Gay Bar never drifts into that tone. It sees these bars and their customers as neither something to snicker at nor to romanticize. Instead, its dispassionate viewpoint allows the characters to affect you themselves.

Ingram also scores points with a fantastically candid interview with Reverend Phelps of ”God Hates Fags.” Rather than simply let Phelps hang himself with ridiculous and ignorant statements, Ingram actually coaxes from Phelps the back story behind how he became the way he is and why he dedicated his life to hate. Phelps comes across, briefly, as human — an immensely confused and dislikable human, but a human nonetheless.

The most striking thing about the film is the constant sense of peril, the realization that these people still live in a world where gays are routinely injured and even killed because of who they are. ”Your best friend could become your worst enemy,” says one bar patron. The bars endure police raids and arsons, and get ransacked by redneck mobs. Viewing it from a cozy theater in D.C., it’s like a movie about a faraway country shot right in our own backyard. — WD