HOW TIGHTLY IS the life you are living in the present bound to your ancestral past? Is it possible to move into the future without severing those familial, geographic and spiritual ties? The films in ”Of Different Spirits” suggest that preservation is not only possible, but necessary. 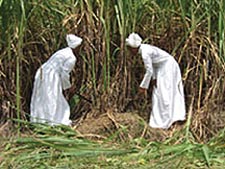 Among the native community, the concept of two-spiritedness is not simply another way of referring to homosexuality, but something far more encompassing and weighty. Individuals who are seen to be two-spirited are the embodiment of both the male and the female. Often respected as healers and storytellers, two-spirit people are a segment of the GLBT community whose stories and history should be told more often.

), the film’s namesake is a Blackfoot Canadian whose entire life and being seem to embrace the idea of being two-spirited. Byron is a gay man who, with his partner, is also the adoptive co-parent of three children. He divides his life between the crowded urban center of Vancouver and the open plains of his rural Canadian tribal home. He is a well respected choreographer whose work combines cutting edge modern movement with ancient tribal dances. He is an aboriginal person who often collaborates with non-native individuals to bring those two worlds together.

Chief-Moon’s story is complex and actually seems more the fodder for a host of documentaries, not a single 48-minute film. And this is where it falters.

Grey Horse Rider fails to find a true focus. Jumping from one aspect of Chief-Moon’s life to the next, audiences will likely feel thrown off-kilter as they try to follow where director Marlene Millar is taking them. What begins as a well-shot and conceived film documenting Chief-Moon’s creative process in his choreography, soon becomes over crowded with a myriad of family and community stories and concerns. Slightly frustrating is that all of these elements could already be found locked into the subject’s powerful and moving dance performances.

In spite of this, audiences should take advantage of the opportunity to see inside a segment of the GLBT community too often not discussed and the life of a man whose name we should all know.

) floats narrative story telling over slow and deliberate vignettes. While the audio and visual elements of the piece are separately intriguing, a fully coherent connection is never quite made. It is as though the audience is left to their own devices to integrate the filmmaker’s intention. Because the story being told is so intimate and particular to the narrator’s family, that request is simply too much. — TA