YOU MAY HAVE already seen On the Downlow (

) on Logo, a film by Abigail Child following the lives of Ray, Antonio, Kerwin and Billy; four men who have sex with men. Beyond that, it gets a little hazy.

Audiences may be expecting a sweeping look at what this controversial phrase means, wondering whether Child will be going as broadly as to include the likes of James McGreevey, the former Democratic New Jersey governor who came out and divorced his wife, and other societal stalwarts. That is not the case.

Child has chosen a very narrow, intimate focus for her film, set entirely in Cleveland, on four African-American men, all seemingly of the same socio-economic background. In that sense, the film may seem less about the ”DL” — meaning men who appear socially as heterosexual, but secretly have sex with men — than about four men muddling through adversity that includes prison, drugs and having the state take your kids.

But while the focus may be hazy, Child’s brings two strengths to her filmmaking. First, she gets these men, and the people around them, to reveal things to her that we might reasonably guess they’ve never revealed to anyone. Considering that she’s documenting something these men are, to varying degrees, trying to hide, it’s testament to her skills as an interviewer that she’s able to get them to be so forthcoming. Second, she has a beautiful cinematographic eye that makes spots of low-income Cleveland housing look like sublime, sun-dappled, secret gardens. 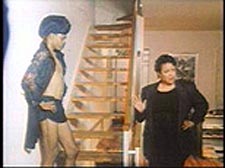 ) is grittier. It should be, considering filmmaker Kimberly Johnson has to present the story of a real D.C. murder as a film within a film. It might seem like a confused scenario on paper — a documentary about a short film dealing with ”the downlow,” from which one of the short’s leads was murdered — but Johnson pulls it off on film. If at first we’re not quite sure what we’re watching, hold on, it all becomes crystal clear.

Some of the original film included here might at first glance seem a questionable warning to African-American women about nasty, cheating, downlow husbands and their male concubines who go through the wives’ make-up when they’re not home, but again, hold on. Johnson goes far beyond that small scope, exploring the circumstances of local John Short’s death and homophobia in the black church. Audiences will wish, however, for better identification of the black gay poster and D.C. prosecutor whom she interviews at length. Regardless, every GLBT Washingtonian should see this short, whether to better know local filmmaking, local perspectives, or the life of Short, a gay man beaten to death by a mob on a D.C. sidewalk. It’s a story you won’t find elsewhere. — WOB