Home / Special Feature / Reel Affirmations / The King and the Clown

The King and the Clown 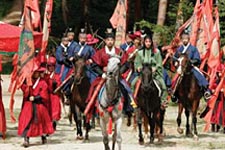 IN 15TH CENTURY Korea, traveling minstrels Jang-sang and Gong-gil keep their eyes open constantly for their next meal ticket, performing acrobatics and comedic skits for change. Gong-gil, with his delicate femininity, plays the coquettish female roles, while Jang-sang is the brains behind their acts.

Finding themselves in Seoul and pairing up with a fellow troop of minstrels, the group is nearly executed as punishment for mocking the king. But when the king’s most trusted advisor decides to allow them to perform directly to the royal court, everyone’s lives change in unexpected ways.

And there’s so much to enjoy in King and the Clown. The skits the minstrels put on wouldn’t be out of place in Vaudeville — if Mel Brooks were still making good movies, he’d be lifting a lot of these jokes. King Yeonsan, who develops an infatuation with Gong-gil, descends from mere petulance to full-on madness. There’s a moment when Gong-gil entertains the king with a puppet show — it’s both sweet and forlorn, and captures the fragility of the moment and the character.

That’s just one moment out of many in a film that stands out as a supreme work of craft. Things spiral out of control into an ending that, while sad, is uplifting in its implications. For all the sadness there seems to be, Jang-sang and Gong-gil both manage to discover and understand the true joy of being.

The King and the Clown is a great accomplishment that shouldn’t be missed. — SB

The King and the Clown