By Randy Shulman on October 16, 2007 @RandyShulman

HOW DEEP RUNS a mother’s love? Especially when the mother in question harbors profound guilt over a life disconnected from her only son? Dan Wolman’s film is suffused with extraordinary pain and sorrow, and yet it honors the triumph of spirit and determination in one woman’s fierce dedication to her son. 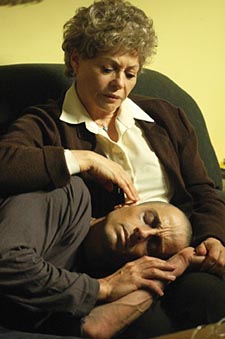 Uzi Pomerantz, a young, celebrated dancer ravaged by the final stages of AIDS, is the son in question. To ease his pain, he smokes pot. But when the coffer runs dry and his connection is unreachable, his mother — quiet, strong-willed Pnina — takes it upon herself to go on a quest for ”grass.” The thought of a 70-year-old woman scoring drugs may sound amusing, but the way things play out is anything but funny. Into the Tel Aviv night Pnina embarks, clutching a crumpled list with the numbers of Uzi’s friends. Her physically and emotionally exhausting journey not only opens her eyes to a life previously led by her son, but inevitably places her in the path of grave danger.

Along the way, she learns things about Uzi that pry open her heart and let loose her inner shame for not having the courage to stand up to her late, demanding husband, an artist of note. When, near the end of the journey, one of Uzi’s friends recounts a story of ”tied hands,” it’s almost too much for Pnina to bear, and this rock of a woman crumbles.

As Pnina, Israeli actress Gila Almagor gives a performance so perfectly nuanced, so rich and subtle, that it leaves you stunned. Pnina is the heartbeat of the movie, pounding with a desperation and determination to succeed in her quest at all costs.

Wolman’s drama is steeped in remorse and heartache, and yet it’s never less than compelling. The narrative is so original and engaging, the characters so richly drawn, that it pulls you in with a magnetic force. It’s absolutely magnificent and it leaves you feeling as though you’ve experienced another, albeit all-too-familiar, world. — RS

Randy Shulman is Metro Weekly's Publisher and Editor-in-Chief. He can be reached at rshulman@metroweekly.com.
← Previous Story Local Shorts
Next Story → Lonely Child