By Randy Shulman on October 17, 2007 @RandyShulman

IN 1995, LARS von Trier (Breaking the Waves) and Thomas Vinterberg pioneered a new form of avant-garde moviemaking known as Dogma. The purpose was to ”purify filmmaking” by eschewing special effects and production values. Among its many stringent rules: All camerawork must be handheld and use existing lighting; filming must be done on location, without the use of prefabricated sets or props; and all action must take place in the here and now. 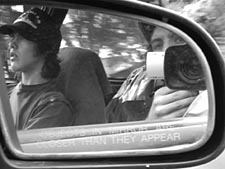 Dogma films receive certification and a number (for a complete list, visit www.dogme95.dk). And Reel Affirmations has been fortunate enough to score Lonely Child (Dogma #41), a Canadian entry directed by Pascal Robitaille. The narrative is divided into two halves. In the first, Médéric (painfully photogenic Dhanaé Audet-Beaulieu) celebrates his birthday at his sister’s, with his new boyfriend, William (Emmanuel Schwartz) in tow. William is documenting his life with a handheld camcorder, hence all interactions are caught on tape. The big moment comes when Médéric’s mother, Louise (Sylvie Bouchard) explodes after seeing William kiss her son. The scene is as shattering as in any conventional drama.

The second half is more bucolic, set at a country home of Nicholas (Francis Ducharme), an ex-boyfriend of Médéric’s. There Médéric finds himself drawn to Nick’s new plaything, Maxime (Pierre-Luc Blais), and an intimate scene between the two, set in the confines of a tent, is brilliantly, erotically combustive.

The movie peters out at the end, though the closing sequence of a song sung by all around a campfire is pitch perfect. After 50 minutes, we’re left craving more. Which, of course, is the mark of a truly great film.

You have nothing to lose by experiencing Lonely Child — it’s free, after all. But you have everything to gain from the exhilarating, fascinating, transfixing cinematic experience it provides.

), a frosty Danish item in which a 15-year-old gay boy seduces his parents’ best friend, a man three times his age. Though it’s tastefully done, there is a discomfort that goes along with the narrative that just leaves one feeling just a bit icky. — RS