Men on the Edge: Men’s Shorts

LET’S BE CHARITABLE and start with the good stuff in this year’s collection of sexually charged men’s short films. 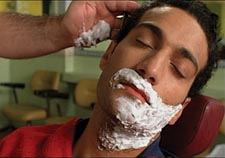 ), in which a man and woman engage in a silent battle of wits for the attention of a policeman. Cute and playful, the film ends on a graceful punch line. It’s also followed by a second version, The $$$hich tells you the cost of everything in the movie, from actors to wine, in Mastercard commercial style.

) points out that a hot guy getting a close shave can be a sexually charged experience. Although you may have to go to Germany to get it.

) compares and contrasts 1970s ”cures” for homosexuality with present day ”cures” for all sorts of childhood psychological ”illnesses.” Maudlin and effective, even with the twist that will instantly remind you of another movie that shall not be named here.

), where a scruffy European guy who’s cute in that scruffy European way apparently doesn’t think he’s so cute. Lots of cake baking and off-putting sex scenes later, we have two people eating cake in the way it’s only eaten in movies: messily, cutely and romantically.

) feels like it should have been better as it obliquely tackles AIDS and homophobia in a black church, but it depends on yet another twist and isn’t particularly revelatory. Parting Words (

) wants to be profound and moving, but it isn’t.

), a French film student embarks with his camera to London to make a project for class. And that’s pretty much all the warning you need. In Slideshow (

), a French-Canadian engages in sex with projected images of himself whilst narrating, brooding and smoking. It’s just as solipsistic and bad as it sounds. Miss Popularity (

) edits together clips from ’50s-era educational films while superimposing ironic commentary, because God knows we’ve never seen that trick done before at a film festival.

At the bottom of the barrel is Solace (

), the story of a young man who is pointedly looking for love yet jumps right into an ill-fated online hookup with an older guy who may be drugging his homemade ice cream. With a main character that’s drawn one way yet acts another, a skeevy and erratic tone, and a useless twist at the end, Solace leaves you feeling dirty — and not in a good way.

Also playing is Offline, which was not available for review. — SB

Men on the Edge: Men's Shorts