By Metro Weekly Contributor on October 18, 2007

HERE IS A MOVIE to be experienced more than enjoyed. Breathtaking and heartbreaking, it’s not a movie you’ll crave to watch over and over again, but you will be grateful for having seen it. Set in China in the early 1990s, there is so little hope for love between two women that every moment of joy is tinged with the fear of discovery. 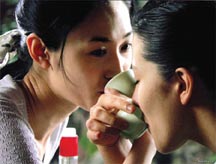 The beautifully shot film creates a lush green world where its characters inhabit the earth rather than simply live on it. Professor Chen (Dongfu Lin) has greater appreciation for his plants than for his fellow man. He’s a cruel and demanding authority figure with unending forgiveness for his son, but none for his daughter, Cheng An (Li Xiaoran). Li Min (Mylene Jampanoi), an orphan granted a six week apprenticeship with Chen, finds solace from his harsh ways in the arms of An. Desperate not to be parted from each other, Li marries An’s brother Dan (Wang Weidong), a vindictive and abusive soldier.

The Chinese Botantist’s Daughter is a slow and methodical love story that captivates through its careful direction, gorgeous cinematography and wonderful cast. Mostly located on an island sanctuary, the long shots of overgrown flora and the hot, humid greenhouses come alive for the audience and provide fertile ground for the growing love between An and Li. The natural beauty of the scenery and the lovers is a harsh comparison to the world that exists off the island, a world that inevitably intrudes on the pair.

Though hard not to make the comparison that this is a lesbian version of Brokeback Mountain, Sijie Dai’s movie deserves to stand on its own as a lovely and important motion picture. — TP