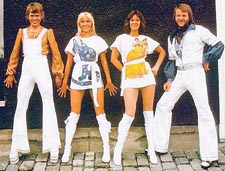 MAMMA MIA, HERE THEY GO AGAIN… Forget The Dark Knight. Oh sure, it’s raking it in at the box office, on track to break even more records than simply biggest opening weekend ever. But cut through all the hoopla, and it’s just a movie. Meanwhile, the No. 2 film last weekend is having a wider impact. And we don’t just mean the excitement that comes from knowing Meryl Streep can do anything and everything, including sing. She can! The real impact of Mamma Mia! is the resurge in interest in one of pop music’s most maligned and most enduring acts. Yep, ABBA‘s back! Well, not back, as in back together — they notoriously declined to regroup for a million dollars years ago. But the Tony Award-nominated stage musical that inspired the film continues to shine on Broadway after almost seven years, and now there’s the film and its soundtrack, which features new cast vocals and slightly tweaked original productions from group co-founder Benny Andersson. Andersson told Billboard he wanted to stay true to the originals but keep it interesting to those who know the music by heart. He succeeded: The soundtrack debuted in the Top 10 on Billboard‘s main album chart last week. It actually topped the British album chart, and the quartet’s songs are getting action on the singles chart across the pond, too. Plus, sales of the ABBA Gold compilation are on the rise again. Billboard reports it’s already sold over 4 million total copies in the U.S. — and that’s just among the gay population. (It’s not actually, but doesn’t every gay man own one?) Thank you for the music, ABBA….

SAY MY NAME, SAY MY NAME… Now that Destiny’s Child is really over, all those previously associated with the pop-hitmaking behemoth can finally get some attention without Beyonce hogging the limelight. Oh, wait, not so fast: The Bootylicious-est of them all is said to be readying a new album for release in November. It’s a set inspired in part by yet another upcoming film, Cadillac Records, in which Beyonce plays blues singer Etta James. Pop’s most ubiquitous producer, Timbaland, is on tap for the album, along with Rodney Jerkins….

MICHELLE’S DANCING TILL DAWN… But enough about Beyonce. What about Michelle? Michelle Williams was a gospel singer before and after her eight years in the group, and she also starred in The Color Purple musical. But now, as previously reported, she’s becoming a dance-popper. During New York Pride she performed one night at Splash, and in a new About.com interview she gushes about getting more involved with dance music and having just met one of her favorite DJs, Junior Vasquez. Well, okay then! Her dance album, Unexpected, is due in just a couple weeks. ”And we ain’t stopping till the morning light,” Williams sings about clubbing on first single ”We Break The Dawn,” which is slowly working its way up the Billboard Club Play chart and already topped the Dance Airplay chart….

KELLY’S JUST GETTING IN… Williams isn’t the only Destiny’s Child newly devoted to dance music and clubbing. Earlier this year, Kelly Rowland had a hit with ”Daylight,” a remake of a ’70s R&B song by Bobby Womack and added to a reissue this spring of Rowland’s lackluster-selling solo album from last year, Miss Kelly. ”Daylight” cracked the Top 5 of the Billboard Club Play chart earlier in the year, but it should have gone all the way — and surely would have if more people had heard the Hex Hector remix. Hector, who seems to be quietly returning to remixland, throws a little darkness and shade to what is an otherwise deceptively light and simple song, about the lure of nightlife that goes on all night. ”Most people are just getting up, when I’m just getting in,” Rowland sings. Rowland is reportedly in the studio working on her third solo set, though no word on its planned release….

THE INDEPENDENT WOMEN… And what about the earlier members of Destiny’s Child, the ones who didn’t survive the wrath of Beyonce’s dad, the group’s manager? Well, LeToya Luckett is expected to release her second solo album in the fall. It’s said to be influenced by music from the ’80s. She’s worked on it with some familiar R&B producers, from Rodney Jerkins to Babyface, as well as many of today’s biggest pop and hip-hop heavyweights, from Danjahandz to Pharell Williams to, yes, Timbaland.

Meanwhile, LaTavia Roberson is also working on a solo album with many of today’s biggest hip-hop producers, including Scott Storch, Swizz Beats and Outkast’s Andre 3000. Roberson’s album may also see light before the year’s out….

LITTLE SISTER DECIDED… And then there’s Beyonce’s little sister. Did you know Solange Knowles co-wrote Beyonce’s ”Get Me Bodied” and ”Upgrade U” as well as Williams’ ”We Break the Dawn?” Well, five years after her disappointing debut, Solo Star, maybe Solange will actually impress us the second time around. Her new album, due in late August, is awkwardly titled Sol-Angel and the Hadley St. Dreams. The set kicks off with cute, jazzy first single ”I Decided,” co-written by Pharell Williams. Aside from the expected Neptunes production, a second version, ”I Decided Part 2,” was produced by hot British dance production duo Freemasons. And the Freemasons’ more dramatic version is quickly ascending the dance charts and will be the main version released in Europe….

Michelle Williams:
We Break The Dawn

THE CATS’ NEW MEOW… Now that summer is really, truly here, you’re mind is probably dreaming about the beach and barbecue — not to mention what’s in store for the fall. The fall? Well, at least the music industry is. In the past couple weeks, the publicity wheels have been churning, announcing early details about many of the star attractions, most to come right after Labor Day. Like the Pussycat Dolls. As it were.

YOU’RE GONNA LOVE HER… Gay Pride in New York last weekend was much ado about Jennifer Hudson, who was the surprise performer at Sunday’s Pier Dance, working the crowd into a frenzy recreating her Oscar-winning showstopper from Dreamgirls, ”And I’m Telling You I’m Not Going.” She opened with ”All Dressed Up In Love,” her absolute gem of a song from Sex and The City. She also performed her new single ”Spotlight,” and then Junior Vasquez debuted two of his own remixes of the song back to back at the official Pier Dance After-Party. As a certain judge would say on the show that first brought Hudson to our attention, American Idol, the new song is just ”aiight” — and it’s not inspiring us as much as we had hoped it would in her self-titled debut album, due in September. Also concerning: The fact that she’s not reaching as far left field as it was originally announced she would, working with some of the most ubiquitous names in hip-hop. Nearly a year ago, for example, she was said to be collaborating with Salaam Remi, the man behind many an Amy Winehouse marvel. She also told Billboard then that she was staying away from hip-hop. That doesn’t seem to be true anymore. Ne-Yo and Stargate co-produced ”Spotlight,” and Billboard reports now that others, including Christopher ”Tricky” Stewart (Rihanna‘s ”Umbrella”) and, yes, again, the most ubiquitous of all, Timbaland. She also got help from shlocky balladmakers Diane Warren and Robin Thicke. ”I think people will be pleasantly surprised, because it shows a side of my work that no one has heard before,” Hudson told Billboard….

JEM FINALLY WAKES TO NEW GEMS… ”It’s Amazing” was another standout from the Sex and the City movie and soundtrack, a gem from Jem, a name that may not be familiar to you, regrettably. The Welsh singer wrote ”Nothing Fails” for Madonna years ago, and her signature sound is very much in that vein: moody, minor key music with electronic flourishes, and lyrics offering realistic but resolute expressions of hope. Her debut Finally Woken was one of 2004’s best pop albums. If first single ”It’s Amazing” is any indication, the new set, Down to Earth, due in September, traverses the exact same path. Billboard reports she’s worked with producers of hits for Kylie Minogue and Lily Allen. Sounds promising….

GET UR FREAK ON… Missy Elliott is also expected to release her latest studio set Block Party in September, with production help from the same old crew, from Timbaland to Timbaland protÃ©gÃ© Nate ”Danjahandz” Hills to Pharrell Williams. ”There are a lot of dance joints on there. It’s one of those albums you can play out in the streets,” Elliott told Billboard, adding that the album is probably more musical and melodic than her previous sets, with Elliott singing at several turns, including on lackluster first single ”Best Best”….

CIARA’S DANCE KINGDOM… Ciara is also set to release her third studio set Fantasy Ride in September, especially noteworthy because it’ll be three discs of five to six songs each. According to Billboard, one represents ”sensual songs,” another uptempo hip-hop in original Ciara style (think her 2004 hit ”Goodies”), and most exciting of all, a disc called ”Kingdom of Dance” showcasing Ciara’s ”house-leaning, freestyle-tinged cuts”….

CHEMICAL BEATS… Thirteen years together, the British dance duo the Chemical Brothers just get better and better as they go. But before they go any further, they’ll release a Best-of Collection in September. Brotherhood collects 13 of the duo’s greatest hits, from ”Block Rockin’ Beats” to ”Star Guitar” to ”Do It Again,” and also includes a new track ”Keep My Composure,” featuring Baltimore-bred rap group Spank Rock. A second disc in the set will feature ”Electronic Battle Weapons 1-10,” or the testing grounds and foundations for many of the Brothers’ hits and never before widely available. ”Electronic Battle Weapon 10” provided the groundwork for new single ”Midnight Madness,” set for release next month….