A CONFUSING MUDDLE that never finds either its voice or its purpose, Saturn in Opposition is one of those foreign films that causes people to mistakenly believe they don’t like foreign films. It may well be that they simply dislike bad foreign films, and in this case that’s perfectly acceptable.

Set in Rome, Saturn in Opposition revolves around the self-created family of Lorenzo and Davide. Their close-knit group includes the seemingly perfect couple Antonio and Angelica, the perplexing paring of the gruff Neval and her good-natured and oft-bullied husband, Davide’s ex-boyfriend Sergio, and the self-described drug addict Roberta. But the movie does very little once it has gathered together its diverse and potentially interesting cast of characters. In fact, the group’s untold or hinted at back stories all seem to hold far more promise and interest than the story into which director Ferzan Ozpetek has chosen to drop us. 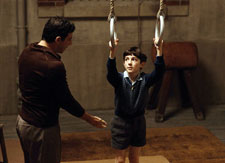 And it’s not simply that Ozpetek insists on knitting together situations that are entirely predictable — it’s the failure to provide us with a single place to set down anchor. We’re allied with no one and, as a result, the audience is left sitting on the sidelines waiting to be let in. Why should we care about these people? Why should we invest in their lives? Why didn’t we go to another movie where we wouldn’t have to spend the entire time reading subtitles?

Saturn in Opposition leaves too much unfinished, contenting itself with poetically tying up enough of the loose ends that it can close with a clean conscience. Nothing of consequence has truly been resolved. The various outcomes are, apparently, none of our business. And that’s the irony of this film. It purports to be about family and the relationships that tie these diverse individuals to one another. Unfortunately, the relationship that director Ferzan Ozpetek has completely abandoned is that of his film to his audience. —TA