RISING SEAS HAVE engulfed many of the cities of Pacific coastal regions. Jets have been grounded for fears of terrorism and pollution. Violence seems poised to engulf the world. And in a disintegrating suburban California family, a young boy is discovering that he has some unusual — and possibly frightening — abilities.

This pre-apocalyptic landscape is the background for writer-director Jennifer Phang's wildly inventive, compelling and entertaining Half-Life. It's rare enough a film tackles such a stack of themes through a magical-realism perspective — it's even rarer when it succeeds.

Saura Wu (Julia Nickson-Soul) and her children, depressed teen Pam (Sanoe Lake) and Tim (Alexander Agate), are still attempting to reconcile the fact that her airplane pilot husband abandoned the family a year ago, flying into the great unknown never to return. Saura has found some comfort in her boyfriend, Wendell (Ben Redgrave), but the stress of providing for her family is causing her to crack.

Her children are cracking as well. Pam seems adrift, working as a janitor at the local airport and pining for best friend, Scott (Leonardo Nam), the gay adoptive son of an evangelical pastor and wife. Tim struggles in school, raising the concern of his teacher, who happens to be dating Scott.

It's a testament to Phang's writing and direction, as well as the uniformly excellent performances by the cast, that all these tangled and disparate threads never seem to be too much. Weaving back and forth between sadness and humor, Half-Life is never less than compelling.

Phang employs animated segments that burst onto the screen from Tim's childish crayon drawings. In other films, these types of segments are too often gimmicks that distract the audience — but here they are imaginative and evocative, another part of a near-magical world that's full of both menace and promise.

Half-Life brims with memorable moments. Responding to a neighbor's passive-aggressive declarations of sorrow for Saura's family problems, Saura hilariously offers her condolences for the death of the neighbor's dog: ”It must have been really ruff.” Or when Tim finds Pam and Wendell sharing a clandestine and destructive kiss in the kitchen, and Pam raises a shaking finger to her lips silently pleading with Tim not to tell.

The world around them may be lost in entropy, and not everyone has a happy ending, but Saura, Pam and Tim ultimately discover what they need in each other. And it's simply a joy to watch them find it. 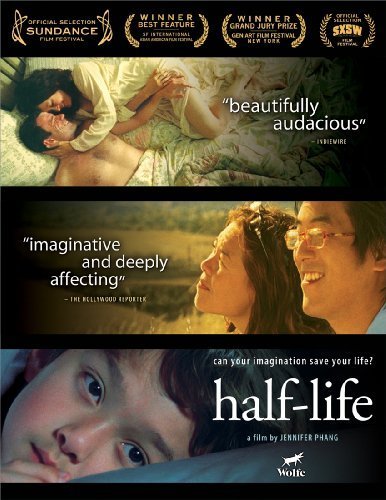