On the Other Hand, Death: A Donald Strachey Mystery

Chad Allen reprises his role as Donald Strachey in this third installment of the ”Strachey Mystery Series.” From his rumpled overcoat to his fondness for a well-shaken martini to his sassy office sidekick, there's an undeniable nostalgia about Strachey. It's like a Romantic postcard to a film noir past sent unexpectedly from upstate New York.

Except, of course, that the patient spouse waiting for Strachey to come home is a man, this private detective mixes his martinis to a waltz count and the assistant with a quick retort is a gay Asian male.

On the Other Hand, Death finds the detective juggling two seemingly unconnected cases. One involves a cheating wife who it seems isn't cheating (nor is she anyone's wife), while the other delves into a series of hate crimes against a lesbian couple's farmhouse. Margot Kidder does a great turn as one-half of that couple — the half that chases intruders with a baseball bat and hasn't met a bit of profanity she hasn't liked.

In just under an hour-and-a-half, we also hit on employment discrimination, GLBT youth suicide, an unexpected affair, arson and the jealousy that can come when that college boyfriend returns and actually looks better than he did in college. It's a fast-paced ride, even when Strachey's ailing car just won't start.

On the Other Hand, Death is fun, entertaining and will keep you guessing till the very last frame. This is one for those who like their mysteries and their martinis served with a twist or three. Straight up.

On the Other Hand, Death: A Donald Strachey Mystery 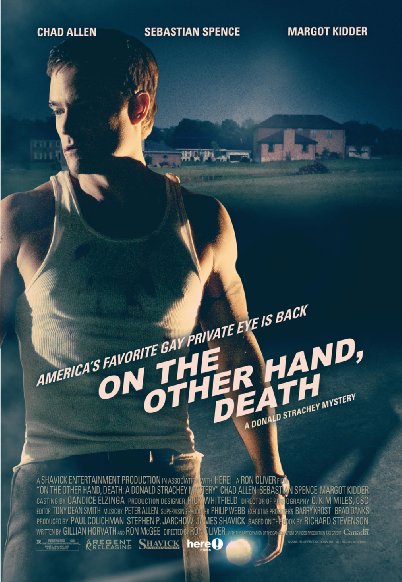