25 Gay Films Everyone Should See

In many ways, movies are the heart and soul of America, our most widely shared cultural moments played out on the silver screen. We’re a nation where everyone can recite the plot of Star Wars, recognize the theme from Jaws, marvel at the twist-ending of The Sixth Sense. 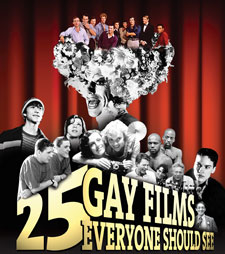 While gay characters and stories took a long time to join that national consciousness of flickering images, our community boasts a cinematic soul of sorts — stories and characters who have given us a shared experience that helped shape us and support us.

Milk is this year’s latest gay Oscar bait, but while you await the roll out of the red carpet, here’s a list of GLBT films that everyone should see. Or, in the case of movie maniacs – yes, like us – revisit often (thank heaven for Netflix). From uplifting to tragic, comedic to dramatic, these 25 films reflect the heart and history of a community.

Unthinkable to miss, yet heartbreaking to watch, Aimée & Jaguar takes all the desperation of being Jewish in Nazi Germany, then adds to that the added danger of indulging in a lesbian affair. The movie leaves you feeling helpless as you empathize with the lovers’ romantic abandonment, yet know that doom is surely around the next corner. That it’s based on the true story of the wartime affair between Lily Wust, the good Berlin housewife and mother whose husband is off fighting for the fatherland, and Felice Schragenheim, the Jewish journalist who flaunts herself in front of her would-be executioners as she passes herself off as a gentile, makes it all the more painful. Thanks to gorgeous cinematography and elegant acting, Aimée & Jaguar is one for the GLBT cinematic hall of fame.

Few gay films are as richly affirming or powerfully uplifting as this coming-of-age, coming-to-terms romance between two London boys. Based on a play by Johnathan Harvey and directed with sensitivity and supple grace by Hettie Mcdonald, Beautiful Thing ultimately pumps your heart full of joy. But getting to that joy is a bumpy road for the quiet, shy Jamie and his schoolmate Ste, an abused, wounded pup who finds safe haven in Jamie’s home, and eventually responds to the tenderness shown to him by his new friend. The ancillary characters — Jamie’s tough-as-nails mother (Linda Henry) and a troubled, Mama Cass-infatuated neighbor (Tameka Empson) — are every bit as integral to the film’s narrative fabric. Yet at the center lies the simple, glorious tale of two emerging gay youths who find their heart’s desire: each other.

It’s the film that introduced the world to the talent known as Hilary Swank. More importantly, it’s the film that dramatized — brilliantly, searingly, brutally — the life of Brandon Teena, a transgendered teen viciously murdered after the crowd he ran with discovered him to be a biological female. Kimberly Peirce’s direction is volatile and uncompromising, but it’s Swank’s remarkable, gripping, Oscar-winning performance that propels Boys Don’t Cry to absolute magnificence. Side note: Peirce, who is gay, has only made one film since — 2008’s critically-acclaimed box office flop Stop-Loss.

25 Gay Films Everyone Should See: The Sequel

20 Gay Shorts Everyone Should See

15 Black LGBTQ Films Everyone Should See 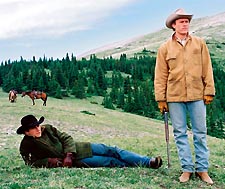 Is there anything more to say about the phenomenon that is Brokeback Mountain? Perhaps this: Despite unleashing a torrent of ”I wish I could quit you” gay-cowboy jokes on a tittering nation, Ang Lee’s adaptation of Annie Proulx’s short story hasn’t lost one iota of its emotional power, has never succumbed to the subversion of cultural irony. All the jokes in the world were unable to lessen the impact of the final images of lost love and loneliness. That’s in no small part due to the performances of Jake Gyllenhaal and Heath Ledger. But while many of Brokeback‘s gay boosters thought the film a first-ever big-screen romance, the film was far darker — remember Ennis’ wife, Alma (Michelle Williams), finally blurting the truth about her husband’s fishing trips? As much as Brokeback Mountain was about the love of two men, it was about the destruction that the closet wreaks on everyone it touches — gay and straight.

With a scenario that seems absurd by contemporary mores — a Columbia professor cooling her heels in 1959 Reno so that she can simply meet a Nevada residency requirement to get a divorce — the romance sparked between that professor, played with appropriate restraint by Helen Shaver, and rough-and-tumble Cay (Patricia Charbonneau) is beautiful contrast to the desolation of the desert and the oppression of society. Dust gives way to glorious vistas set to a vintage rock-and-roll beat, and the sky opens uncharacteristically to drench these lovers as they enjoy one of Hollywood’s best kisses.