Chip Wells's love of dogs, cats and all the rest becomes a force for keeping ill people with their animal companions

Chip Wells presents a mild, polite demeanor. There’s a Southern sensibility in the man that makes personal, yet common, questions – his age, for example – seem invasive.

When it comes to animals, however, this veterinarian switches gears, sharing many stories about the animals that have populated the arc of his life, beginning with Ring when he was growing up near Roanoke, Va.

”I’ve had dogs all my life, except for the past two years – I’ve been dog-less,” Wells says, apparently still surprised that he’s been living with no canine companion. ”Starting from when I was 2, Ring was a collie, followed by Molly, a Saint Bernard – these are just the dogs, not the rabbits and the cats and…. The rabbits started, I guess, when I was in the first grade with Alexander. Turned out it should’ve been Alexandria, because she put me in the pet-rabbit business very quickly. And then all the snakes and frogs and so forth. 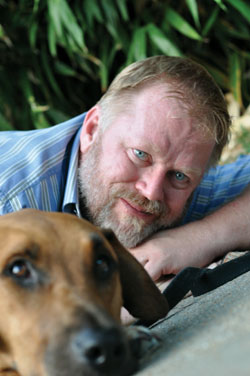 Chip Wells photographed by Todd Franson outside the National Zoo on Monday, June 28, 2010

”My dog passed away a couple years ago, and I wanted to grieve and find a time when I’m not on the road traveling so I can adopt a new one and get it settled. For some reason, I just haven’t gotten around to it.”

Considering his work as a risk analyst at the U.S. Department of Agriculture’s Animal and Plant Health Inspection Service and the time he spends scrumming with the Renegades Rugby team, Wells can be excused for not finding the time to hunt for a new hound. As if those commitments weren’t enough, though, he also serves as the volunteer executive director of Pets-DC, the group behind the annual Pride of Pets dog show. It’s a job he’s been doing for nearly two decades.

It began when Wells was living in Middleburg, Va., caring for horses and other animals in the late 1980s. His compassionate nature was further stirred by the distress in his human companions as AIDS ravaged the community. He wanted to contribute in some way, which led him to volunteer as a quilt monitor for the Names Project Foundation’s AIDS Memorial Quilt.

”Looking at the quilt panels, I started noticing how many depicted people and their pets,” Wells remembers. ”Well, of course pet owners were going to be getting sick as well.”

From there, Wells began exploring what assistance was available for pet owners dealing with HIV-related illnesses. Aside from organizations in New York, San Francisco and Los Angeles, he couldn’t find much. He did, however, run into opinions from the medical establishment suggesting that people with HIV should probably avoid having pets, for a number of reasons. On a pragmatic level, Wells knew that pet owners would be very unlikely to separate themselves from their companion animals. He may have already had some intuitive idea that animal companionship could be good medicine. What he knew with certainty was that he could do something, and Pets-DC was formed with a mission of helping people with AIDS care for their pets, whether that meant walking dogs or helping pay a vet bill.

”Pets-DC will be 20 on Oct. 4,” he says, adding that Pride of Pets has been around nearly as long, having marked its 17th year on June 26. ”We created this show back then because we wanted to have some kind of fun event for our volunteers and the community. If you remember back then, we were really feeling the devastation from the HIV/AIDS epidemic. There was a lot of sadness and grief in the community. I dare say Dupont Circle was probably the site of more memorial services at the time than other types of events. We wanted to create something that we could feel good about, just celebrating and enjoying life. And for our clients who were living with HIV at the time, to give them something fun to do. We wanted to be a little whimsical about it. That was the start of it.”

While laughter as medicine was put into practice with Pride of Pets categories such as ”best tail wagging” and ”most glamorous,” Wells seems most proud of the his organization’s contribution to clients’ health through the animal-human bond.

”What we knew was that people were going to keep their pets, and we knew that the medical profession, out of an abundance of caution, were saying, well, maybe you shouldn’t. So we thought we should help them do it as safely as possible.

”And over time,” he continues, “the scientists and medical professionals have looked at that question and figured out that pets, if they’re healthy, pose very little risk to people who are immuno-compromised. And, at the same time – not specific to people with HIV/AIDS, but inclusive of them – there was this whole cadre of scientists from various disciplines that … discovered that there area a whole lot of benefits for people living with or interacting with companion pets. There are actually psychological, physical and emotional benefits. We know that the act of petting a dog will lower your blood pressure, for most people. We’ve discovered things like people who have had traumatic injuries, their healing time is lessened if they have pet interaction during their healing. The bottom line is that we know pets provide the emotional, psychological and benefits for anyone, but in particular for people who are living with medical disabilities.”

Wells is committed to keep Pets-DC going into the future, having expanded the group’s mission beyond HIV/AIDS to serving clients with other disabling illnesses. And while medications have changed the landscape of HIV/AIDS in the two decades Pets-DC has been around, he stresses that the economic burdens of the disease are still around – meaning that volunteer dog walkers aren’t as needed as they once were, whereas financial help to pay a vet bill or buy pet food remains as in demand as when the group started.

”Pet owners understand that, and their support is appreciated. We need their help and continued support, because HIV and AIDS have not gone away. Medical disabilities are probably always going to be a factor of our community’s life. This is one way we can help our neighbors.”

For more information about Pets-DC, call 202-234-PETS or visit petsdc.org.

Follow Will O'Bryan on Twitter @wobryan.
← Previous Story Pride of Pets 2010
Next Story → Here's to the Dogs!