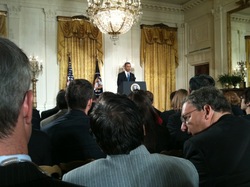 President Barack Obama today announced he had reached a “framework” with Republicans regarding tax cuts, unemployment insurance and other related provisions, which could allow for other bills — including “Don’t Ask, Don’t Tell” repeal — to move forward in the lame-duck session of Congress. A senior administration official said, however, that the tax-cut deal did not provide for any specific guarantees about any legislation other than that tax-cut package itself.

This past week, all 42 Republican senators had sent a letter to Senate Majority Leader Harry Reid (R-Nev.) telling him, “[W]e write to inform you that we will not agree to invoke cloture on the motion to proceed to any legislative item until the Senate has acted to fund the government and we have prevented the tax increase that is currently awaiting all American taxpayers.”

This unified front raised significant questions about the opportunity to pass other lame-duck priorities for Democrats, including the New START treaty, the National Defense Authorization Act that includes DADT repeal language and the DREAM Act.

Senior administration officials discussed the tax-cut framework with reporters this evening. Asked by Metro Weekly whether these other lame-duck legislative proposals possibly being considered were raised in the course of the negotiations on the tax-cut measure, a senior administration official said, “This was a deal simply to resolve the tax issue.”

As such, it remains unclear whether Democrats will be able to get the necessary support from Republicans to proceed to debate the NDAA in the lame-duck session.

The senior administration official added, though, “It should not impact the other priorities the president has for the lame-duck, including START; the DREAM Act; and the defense bill, including ‘Don’t Ask, Don’t Tell’ repeal.

“The president still strongly supports those things and is going to try to accomplish them in the Senate.”

Prior to the deal being announced, White House spokesman Shin Inouye had echoed that comment, writing, “The White House remains fully committed to passage of the National Defense Authorization Act, including the repeal of Don’t Ask, Don’t Tell, during the lame duck. This is a priority for the President, and are we confident that the Congress will be able to address this issue this year.”