Signature Theatre's new show isn't a love letter to the American musical, and neither is Woolly Mammoth's to Apple

The American musical wasn’t born overnight. Like any art form, it came to be in fits and starts. Even today, some audience members — and not just rubes — find it awkward for actors to break out into song and dance. Just imagine what it must have been like the very first time they did so. 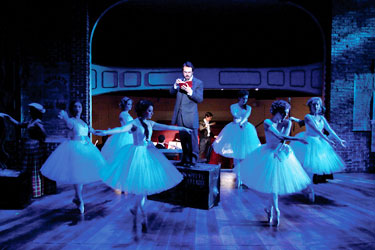 And the Curtain Rises
(Photo by Scott Suchman)

That’s essentially what Signature Theatre is trying to conjure with its new musical And The Curtain Rises.

It’s an intriguing idea, one with serious meta potential: Let’s all laugh at the conventions of the musical that we love so much. But while it has some real flashes of humor — and plenty of visual flashes besides — And The Curtain Rises suffers from being a slightly off-key exercise in navel-gazing. The focus of Joseph Thalken, Michael Slade and Mark Campbell’s musical is too much on the mechanics of putting on a show, with not enough attention to the show itself.

And the show is all over the place. And The Curtain Rises takes as its historical jumping-off point The Black Crook, which appeared on Broadway in 1866 and is purported to be the first American play to use song and dance to advance its story.

But what was its story? It’s never quite clear. At first, it seems to have something to do with life on the prairie — Act 1 paints it as a corny knock-off of Oklahoma. But then, when the theater manager and producer William Wheatley (Nick Dalton) finally realizes that all his actors and stagehands are right and the play isn’t working, the show becomes a vaguely European fairy tale, nominally set in Germany. Act 2 is an impressionistic pastiche of theatrical tropes, from vaudeville to ballet to burlesque. By the time you add in backstage subplots of actors looking and scheming for love, including even one gay twist, you’re likely to have a headache from all the pandering.

Kristin Hanggi, who earned a Tony nomination for directing the ’80s jukebox musical Rock of Ages, makes great hay out of And The Curtain Rises‘s far-flung locales and happenings. And seemingly no expense was spared on Beowulf Boritt’s imaginative, inventive stage design here. We go from a theater’s backstage to a cornfield to a medieval forest, all mostly in just a simple rotation of backdrops, which never slows down or sets back the actors in the slightest.

At some level you have to appreciate what the writers are trying to do here. They’re trying to interest the audience in the goings-on of the creative process — what’s more, the struggle to turn a failing play into a hit musical. There’s no pretense that the musical is any more captivating than was the play. It’s only more titillating, with attractive actors to distract with song and dance. Making lemonade out of lemons, as it were. In the main, the actors are up to the challenge.

But it’s not exactly a love letter to the American musical, and its cynical take leaves a definite sour aftertaste.

Did I mention And The Curtain Rises is a musical? Well, Thalken’s music isn’t much to speak of. It’s mostly tuneless, distinguished more by its snappy rhythms than any melodies. The effect gives Campbell’s words more prominence than they might otherwise have. But by show’s end, you won’t remember much of either.

YOU WON’T LEAVE Woolly Mammoth in the same predicament. You’ll remember all too much of what Mike Daisey has to say about the devastation our technology rat race has wrought. But any user of modern technology should make it a point to see The Agony and Ecstasy of Steve Jobs.

Daisey starts off his muckraking monologue by recounting his longstanding devotion to Apple, sketching the company’s history and that of its co-founder Jobs. The show is really a seminar — actually, a sermon — disguised as a theater piece. It features Daisey just sitting at a table before the audience against a backdrop of white LED lights. There’s no presentation per se, certainly no PowerPoint — Daisey gets great laughs out of a swipe at Microsoft, the maker of PowerPoint.

AND THE CURTAIN RISES

THE AGONY AND THE ECSTASY OF STEVE JOBS

Daisey is a captivating minister, intending a revival toward less consumerism, especially in the technology realm. Because, as he explains, our wanton desire for the latest and greatest gadgetry is de-humanizing. It’s reducing technology factory workers to parts in a machine, easily discarded and replaced. In fact, it’s no great leap to call the situation modern-day slavery.

Daisey draws the most power from his having gone undercover at a huge factory in China where pretty much all iPhones and iPads are made. A notoriously secretive company has found a perfect partner in a notoriously censoring country, filled with cheap labor. Apple and China, sitting in a tree — there’s a reason you don’t hear much about the relationship. But underneath the sheen, it’s rotting at the core.

Daisey shows his iPhone and his iPad to some of the awe-struck workers he meets at the Foxconn factory, which employs some 500,000 people in Shenzhen, China.

They’ve never seen the finished fruits of their labor.

After his visits, in which countless workers talk of suffering at the hands of their employer, the woman who acts as Daisey’s Chinese translator sighs in despair. ”All the stories — it’s just so much.”