Women of the House

With its rather dated depiction of the mores, or lack thereof, of the modern wartime journalist, some aspects of Tom Stoppard’s Night and Day may be a little too obvious for a Washington audience. But a bit of patience reveals, as one would expect with Stoppard, far more than initially meets the eye. After the bravado, there are deeper provocations on such topics as ideals versus pragmatism and the notion that the human connection can be at once cynical and poignant. There is also a particularly interesting female lead and plenty of dry humor. In short, it is a play that is both entertaining and intellectually enduring. 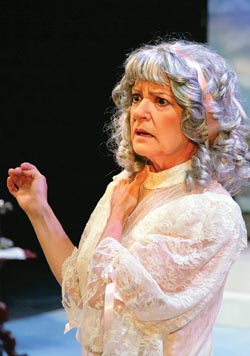 Set in a fictional African nation on the cusp of internal rebellion, this hot-house talkie takes place exclusively on the veranda of the house of a businessman trying to keep his mining operation stable amid the chaos. Descending like flies, two Britain-based newsmen and a photographer arrive in search of the story or photo that will make their names – at least among their brethren. Enduring their presence with thinly veiled contempt is Ruth Carson, the lady of the house, who when she is not feeding on fantasy to stave off boredom, entertains herself by slicing and dicing the reporters’ self-justifications. Life for these people is something of a game. When reality finally intercedes, the question is whether and how they will keep playing.

Referencing a very specific period in modern British history (the late 1970s, early ’80s), this is one of those plays where accents are appropriate. However, as is so often the case, capturing the British vowels and cadence is a distracting challenge for most, and only two of the players here are convincing (Patrick Smith and Sam O’Brien). If you can get past the lingual grappling, then you will enjoy what the Washington Shakespeare Company does very well: the staging of a small but provocative play.

A stunning riposte to the fixed-grin Barbies leering from every glossy page and screen, Abby Wood evokes a luxuriantly bodied Cleopatra, reminding us just how fascinating a ”real” woman can be. Stoppard’s desperately intelligent but desperately bored Ruth exudes a heady mix of insight, dangerous (or perhaps healthy?) abandon and much dry humor, and Wood very convincingly delivers the goods. Though he sometimes teeters on the edge of over-playing, Jim Jorgensen brings palpable personality to his seasoned reporter Dick Wagner and a passable accent (though it was more South African than Australian). As Mr. Carson, Patrick Smith delivers his man with nicely understated gravitas, whereas Daniel Flint as George Guthrie tends more to the heavy-handed than the subtle. As the upstart reporter Jacob Milne, Tyler Herman offers a rare naturalness but did not convince as a young Englishman from Grimsby. Finally, kudos to Sam O’Brien for a very convincing portrayal of an even younger Brit, Alastair Carson.

Playing in rep with Night and Day, the WSC also offers two back-to-back one-act plays by Tennessee Williams with even more interesting women in various states of crisis. Portrait of a Madonna brings us briefly but incredibly vividly into the company of an elderly woman in the moments before her commitment to an asylum. Sent to wait with her in her apartment, the building porter and elevator boy hover uncomfortably while, oblivious to her imminent removal, Miss Lucretia Collins rambles on in concentric circles until she finally reaches her desperate-hearted core. Offering a mesmerizingly soft demeanor, Annetta Dexter Sawyer makes this woman very much her own. Although she occasionally defaults to some rather less-original affectations, when it comes to Collins’s final cri de coeur, Sawyer is raw and powerful. Extremely subtle, understated and effective, Slice Hicks makes his Porter truly live and breathe. Delivering some comedy and a carefully controlled energy as the Elevator Boy, Bob Sheire keeps it just the right side of caricature.

PORTRAIT OF A MADONNA
THE GNADIGES FRAULEIN

Killing two (cocaloony) birds with one stone, The Gnädiges Fräulein offers not only a rare chance to see Tennessee Williams work within the absurdist genre, but also serves as a timely reminder that when it comes to the wild and wonderful, WSC still has the chops. Without searching too hard for a narrative, suffice it to say that on a possibly random visit to the local rooming house, gossip columnist Polly probes the landlady Molly until she divulges, in fits and starts, a somewhat hallucinogenic scoop. It is the story of one of her more colorful tenants, known as the ”Gnädiges Fräulein,” and a long-ago unrequited love that seems to have driven her mad. Although there is much here of Polly and Molly’s pinch-and-pet friendship (the absurdist’s equivalent of a buddy movie), once the wistful and mysterious fräulein appears it is her strange tale of woe that takes over.

Reminiscent of a character out of a one of those early, rather peculiar Loony Tunes cartoons, Mundy Spears beautifully captures a Polly whose veneer of highly stylized ditz occasionally makes way for a canny wit. Fully immersed in the peculiar world of her boarding house, Emily Webbe nicely captures Molly’s grim determination to manage the increasing chaos while providing the essential cornerstone of this piece with her tremendous gift for storytelling.

As the Fräulein, Karin Rosnizeck is a striking, disturbing presence and as her strange story is told, she gives it color and pathos. In the role of Indian Joe, James Finley brings much humor and presence. Finally, mention must be made of Karin Abromaitis’s excellently mimed cocaloony. All told, it is a super ensemble piece; a tribute to director Jay Hardee’s ability to create a bright and unsettled atmosphere without losing even an ounce of clarity.