On Wednesday, June 29, President Barack Obama and the First Lady are due to host the LGBT Pride Month Reception at the White House. Today, Get Equal announced that volunteers will be showing up with cards in hand to the White House to provide guests with a “Get Bold to Get Equal Scavenger Hunt.”

Get Equal DC volunteer Charles Butler told Metro Weekly, “We will be waiting outside the security entrance to distribute these cards to the reception attendees who will then, ideally, will take them inside.”

The scavenger hunt game card, a copy of which was provided to Metro Weekly and appears below, includes nine challenges for the attendees to complete at the reception, including “Get Obama to commit to visiting a shelter for homeless LGBT youth,” “Take a video on your cell phone of Obama publicly supporting Marriage Equality” and “Get Obama to commit to issuing an executive order to immediately stop deporting bi-national same-sex couples.”

A news release announcing the action stated, “The game is meant to be a fun but meaningful opportunity for attendees to step up the pressure on the Obama administration for full LGBT equality.”

Butler noted, “[W]e are there to help embolden these community leaders to speak up once they are inside. … [W]e’re not asking anyone to do anything risky or dangerous or even flashy. We just want them to speak up.” 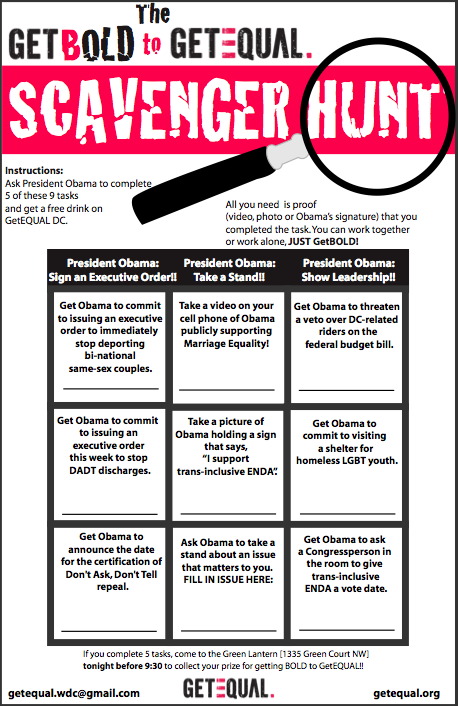