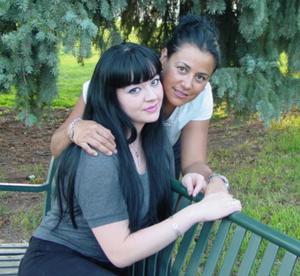 Sujey Pando, who is from Mexico and seeking asylum in the United States after facing a series of abuses and rape in Mexico, also married her wife, Violeta Pando, in Iowa this past year. Today, they had a hearing in immigration court in Denver, which was supposed to be a final decision on Pando’s asylum claim but instead resulted in Immigration Judge Mimi Tsankov scheduling a new hearing — to consider a marriage-based application for a green card — for January 2012.

After leaving court today, their lawyer, Lavi Soloway of Stop the Deportations, emailed Metro Weekly the news, writing, “Today, Immigration Judge Mimi Tsankov halted the deportation of Sujey Pando and scheduled a new hearing to consider an application based on her marriage to her U.S. citizen wife, Violeta Pando. Because today’s hearing was intended to be a final decision day on Sujey’s deportation, the judge’s action was unusual; she spent 45 minutes methodically considering the procedural posture of the case.”

Soloway went on to say that Tsankov “set aside the intended purpose of the hearing,” citing developments, including Attorney General Eric Holder’s rare intervention in a case in May — Matter of Dorman — that addressed similar issues. Soloway stated that Tsankov “noted that the issues involved in this case existed in a context that was ‘fluid’ and ‘in a state of flux.'”

Soloway also wrote that Department of Homeland Security Secretary Napolitano’s announcement on Aug. 18  the DHS and the Department of Justice were engaging in a review of all pending deportation cases for possible closure, including those involving “same-sex couples,” had “an impact on how to proceed.”