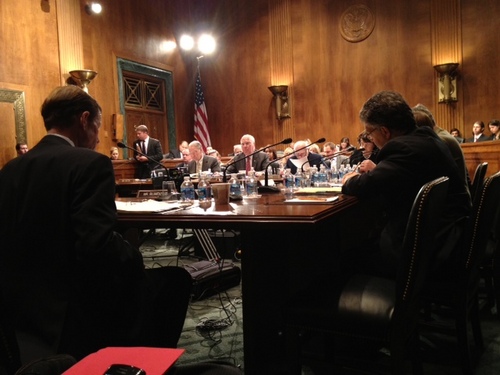 Today, the Senate Judiciary Committee began its formal consideration of the Respect for Marriage Act, legislation introduced earlier this year that would repeal the Defense of Marriage Act.

Additionally, the committee quickly disposed of the nomination of out gay attorney Michael Fitzgerald for a seat on the U.S. District Court for the Central District of California. His nomination was reported to full Senate with no opposition from any members of committee. Ranking minority committee member Sen. Charles Grassley (R-Iowa) allowed the nomination, and a handful of others, to proceed in a group to the floor of the Senate.

In opening the hearing, Chairman Patrick Leahy (D-Vt.) said of the Respect for Marriage Act’s aim, in part, “What would change, and what must change, is the federal government’s unequal treatment of state-approved marriages.”

Sen. Dianne Feinstein (D-Calif.), the lead sponsor of the Respect for Marriage Act, opened her comments at the hearing by saying, “I voted against [DOMA] for the same reason then, that I [support] repeal now.

“Just three months ago, this committee heard” testimony on the impact of DOMA, she said, referencing the earlier hearing.

Due to Senate procedural, the minority Republicans were allowed to hold up the mark-up of the bill, at which time amendments can be offered and a vote would be held, for a week. At that time, Leahy said that the bill “will be” considered.

[UPDATE @ 11:55P: In a statement issued after the hearing by committee Democrats, the Respect for Marriage Act’s Judiciary Committee mark-up and vote is set for 10 a.m. Nov. 10 in room 216 of the Hart Senate Office Building.]