2012 is likely to see marriage movement, good and bad, in the courts, the ballot box and in the legislatures

Proactive efforts got underway this month to establish marriage equality in at least three more states.

Democratic leaders in the New Jersey Senate and Assembly on Jan. 9 announced their intention to introduce a marriage equality bill. Washington Gov. Chris Gregoire (D), a longtime supporter of rights for same-sex couples, announced Jan. 4 that she will introduce such a bill in her state. And in Maryland, where a marriage equality bill passed the state Senate but not the House in March 2011, Gov. Martin O’Malley (D) has said he will sponsor marriage equality legislation in 2012 and will take an active role in moving the bill forward this year. And Maryland Senate President Thomas V. Mike Miller Jr. (D-Calvert) has indicated his chamber will shortly take action on such a measure. 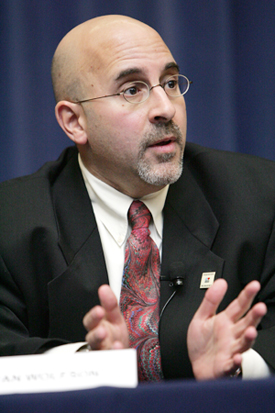 After a 2011 that saw marriage equality become reality in the most populous state yet and the Obama administration issuing a major statement against the Defense of Marriage Act (DOMA), 2012 could do even better.

Evan Wolfson, president of the national Freedom to Marry group, says progress toward marriage equality in 2012 will be ”fueled by the extraordinary, transformative wins we racked up in 2011.”

At the same time, he says, ”We definitely have our big challenges in 2012 and we’re not going to win every battle.”

Both Governors O’Malley and Gregoire seem to be following the example of New York Gov. Andrew Cuomo (D), who was actively involved in successfully pushing through marriage equality in his state’s Legislature in 2011.

But the road will be much harder in New Jersey, where Republican Gov. Chris Christie has said he would veto any marriage equality legislation passed in his state. Supporters will have to gain enough votes to override that veto.

Other states may not get that far. West Virginia Del. John Doyle (D-Jefferson Co.) told WEPM Radio News Dec. 22 that a marriage equality bill has ”no chance” of passing his state’s Legislature. But Doyle said he would introduce a civil union bill.

Colorado state Sen. Pat Steadman (D-Denver) introduced a civil union bill in the Colorado Legislature Jan. 11. The bill is expected to pass the Democrat-controlled Senate, but will face a tougher path in the House, which the Republicans control by one vote.

One state could lose marriage equality this year. The New Hampshire House will likely vote this month on a bill to repeal marriage equality in the state. If it passes, the bill would then go to the state Senate, which under normal procedure would not vote on it until at least April. Gov. John Lynch (D) has said he would veto the bills, allowing marriage equality to remain, although the Legislature could override the veto.

Wolfson notes that marriage equality advocates ”continue to be vigilant” in Iowa, where same-sex couples gained the right to marry in 2009. The state House last year passed a bill that would have started the process of putting an anti-marriage equality measure on the ballot, but Democratic leadership blocked the bill in the Senate.

Two other states – North Carolina and Minnesota – will be turning the matter over to voters in 2012. The legislatures passed bills in 2011 for ballot measures that seek to ban marriage for same-sex couples under the state constitutions.

Minnesota’s ballot measure will appear in November. North Carolina’s, however, will appear on the May 2012 primary ballot – not in November as originally planned. That move may make passage likelier.

North Carolina House Speaker Thom Tillis (R-Mecklenburg) told a press conference that the date change was made to ”remove politics.” Some Democrats had accused Republicans of using the bill to draw conservative voters to the polls in November. But the major contested primaries in May will be the Republican ones for president and governor, meaning the spring turnout to vote on the marriage measure will likely be largely Republican.

Elsewhere, Indiana and Pennsylvania started the process in 2011 for anti-marriage equality ballot measures, and those could see further action in 2012. Both states require two legislative sessions to pass ballot measures that would amend the state constitutions.

In Maine, LGBT advocates collected enough signatures to place a measure in favor of marriage equality before voters on the 2012 ballot. A spokesperson for the effort, Ian Grady, says the advocates have not yet decided whether to submit the signatures and proceed with the effort. Their deadline is the end of January.

Some marriage equality advocates also believe 2012 could see progress at the federal level.

Richard Socarides, a longtime Democratic activist and former White House aide under President Clinton, wrote in the New Yorker Dec. 19 that he foresees ”a strategically timed (if low-key) pre-election announcement” of the president’s support for marriage equality.

Socarides said he believes two federal cases seeking to secure marriage equality — Gill v. Office of Personnel Management (the DOMA challenge) in the First Circuit and Perry v. Brown (the equal protection challenge) in the Ninth Circuit – will be decided this year in favor of marriage equality. If so, he says, they will put pressure on President Obama to announce his support.

”Having a Democratic President, an African American at that, on the ‘wrong’ side of federal-appeals-court rulings on civil rights is an untenable situation,” he wrote.

But the cases are being decided by three-judge panels in each circuit, and could be appealed further to the full circuit courts or directly to the U.S. Supreme Court.

Wolfson makes no predictions about the president’s stance, but says Freedom to Marry will call on the president ”to follow through on the really important and great steps he’s taken” in 2011 — especially Attorney General Eric Holder’s letter to Congress stating that the administration believes Section 3 of the Defense of Marriage Act (DOMA) is unconstitutional and would no longer defend it.

Section 3 of DOMA states that the federal government will not, for any federal purposes, recognize the marriages of same-sex couples.

Both Wolfson and Socarides agree that supporting marriage equality is no longer the political suicide it once was.

”The remarkable new reality for Obama in this election,” says Socarides, ”is that supporting marriage equality is smart politics.”

Wolfson notes that a July analysis of more than a decade of polling data by Joel Benenson, President Barack Obama’s lead pollster, and Jan van Lohuizen, President George W. Bush’s lead pollster, showed that support for marriage equality nationwide rose about 1 percent per year between 1996 and 2009, but jumped to 5 percent per year in 2010 and 2011.

The analysis also concluded that, since 2006, support has risen 8 percent among Republicans and 13 percent among independents. The study was commissioned by Freedom to Marry.

Wolfson says his organization has been delivering that information to both Democratic and Republican elected officials and party operatives ”to propel that momentum and have the political types stop acting as if this were 1996. The politics of the freedom to marry have changed dramatically, as has public support.”

But Freedom to Marry is also working in communities to spread the message about ”why marriage matters and who gay families are” and ”painting real pictures through stories and conversations,” says Wolfson.

That, he says, ”is how you build the support that creates the climate for political and judicial change.”