In the intimate, delicately wrought period drama Albert Nobbs, Glenn Close transforms herself into a 19th century Irishman who is concealing the fact that he is biologically a she. On the surface, Albert has been hiding his gender to maintain his post as a waiter. But there are deeper, profoundly personal reasons for Albert’s choice that become apparent as the film’s narrative travels its steady, quiet path.

Close portrays Nobbs with a timid, withdrawn air. If the character itself seems lifeless, it’s because Albert himself has no life. 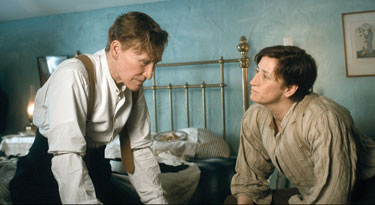 But that changes when Albert meets a kindred spirit in Hubert, another Irish woman passing in society as a man. Portrayed by Janet McTeer, Hubert is everything that Albert isn’t. Happy, content, enveloped in a strong, warm marriage, and boasting a cocksure confidence that makes him potently larger than life. The friendship opens up Albert to new possibilities, new hopes, new dreams.

Albert’s awakening is both breathtaking and heartbreaking – mostly because, this being a film set in a scarlet fever-plagued Ireland, we know things aren’t necessarily going to end up very well.

Last week, both Close and McTeer were rewarded for their rich, magnificent performances with Oscar nominations – the former for Best Actress, the latter for Best Supporting Actress. But in the week prior, they were on the phone with Metro Weekly during a short break in the shooting of the final season of Close’s bracing legal drama, Damages (in which McTeer has a featured role), to shed insight on Albert Nobbs and its two distinctly different gender-bending characters.