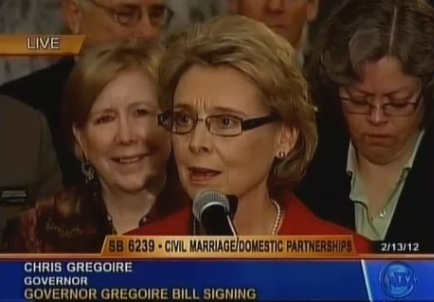 Washington state Gov. Christine Gregoire (D) has signed same-sex marriage bill into law, completing the final stage on the road to marriage equality in the Evergreen State. The bill, concerning civil marriage and domestic partnerships, was signed today during a ceremony in Olympia, Wash.

Gregoire emotionally thanked those whose efforts helped pave the way to her signing the bill into law, and promised that, if brought to a referendum vote in November, Washingtonians would allow the bill to pass.

“We in this state stand proudly for equality. … Marriage equality is right for our state, and our time is now.  The time is today,” she said to the assembled crowd of supporters.

This past week, the House approved the marriage equality bill by a bipartisan vote of 55 to 43, following the earlier Senate vote in approval on Feb. 1. The state, pending an effort to force a referendum vote on the bill, will join Connecticut, Iowa, Massachusetts, New Hampshire, New York, Vermont and the District of Columbia in allowing same-sex couples to marry.

According to a New York Times article, Washington was “among 30 states that have passed laws defining marriage as being between a man and a woman, but it has steadily expanded rights for gay couples since 2006, the year it approved a wide-ranging gay rights bill. In 2007, it approved rights for domestic partners. In 2009 it passed a so-called everything-but-marriage bill.” Now it adds full marriage equality to its lengthy pro-gay resume.

Human Rights Campaign president Joe Solmonese praised the achievement in a news release, saying, “Today is a historic day in Washington State, and it’s reflective of the growing support for marriage equality we’re seeing across the nation – regardless of one’s religion or background.” 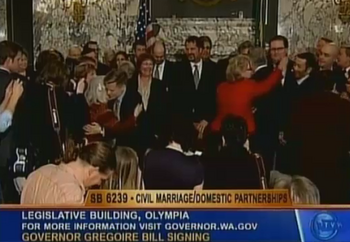 Lacey All, chair of Washington United for Marriage, said in a statement from the coalition, “We thank Gov. Gregoire for her tremendous leadership in passing this landmark legislation. From her moving remarks endorsing the legislation to her unwavering courage and commitment throughout the legislative process, the Governor has been a key ally in forming the bipartisan coalition that passed this bill.”

Jody M. Huckaby, executive director of PFLAG released a statement about the States accomplishment, saying, “Congratulations and many thanks to the Washington State Legislature, and Governor Gregoire, for passing the marriage equality act, and signing it into law. PFLAG Regional Director Kathy Reim and chapter members across Washington worked closely with many local partner organizations to educate legislators and communities about the critical need for marriage equality. Their leadership truly changed hearts and minds across the state.”

Despite praise from pro-equality groups, the bill’s passage is not welcomed by all. Opponents of the measure have said they will seek to collect the 120,557 signatures needed to reverse the decision by placing a referendum or an initiative on the ballot this November. The passage of the state’s comprehensive domestic partnership law in 2009 led to Referendum 71, in which voters approved the domestic partnership law that year.

Brian Brown, the president of the National Organization for Marriage, is vocal about his organization’s opposition to the bill.

“Washington legislators may think it’s politically fashionable to follow Hollywood over the cliff, but they will soon learn there are consequences to their actions,” he said in a statement. “Maine voters vetoed their gay marriage law and then a year later threw the legislators out of office. In Iowa, voters kicked three judges off their state Supreme Court for deciding to impose same-sex marriage. And in New Hampshire, voters also ended the careers of legislators who voted for gay marriage. The same thing will happen in Washington State.”

In her speech, Gregoire addressed same-sex marriage opponents who claim the bill restricts religious freedom in the state. “The bill I am signing today is simple and clear …. Churches and affiliates have exemption. … This bill preserves freedom of religion for our churches, absolutely nothing changes in the state of Washington.”