In an interview with Piers Morgan on CNN, actor Kirk Cameron, best known for his role as Mike Seaver on the show Growing Pains, once again brought his opposition to same-sex marriage back into the public spotlight. When asked to open up on the hot-button political issue, Cameron confronted it with apprehension.

“Marriage is almost as old as dirt, and it was defined in the garden between Adam and Eve — one man, one woman, for life ’til death do you part,” Cameron said. “So I would never attempt to try to redefine marriage. And I don’t think anyone else should either, so do I support the idea of gay marriage? No, I don’t.”

When asked whether or not he viewed homosexuality as sinful, Cameron’s response was up to par with anti-gay pundits like presidential candidate and former Republican Pennsylvania Sen. Rick Santorum and National Organization for Marriage president Brian Brown.

“It’s unnatural,” Cameron replied. “I think that it’s detrimental, and ultimately destructive to so many of the foundations of civilization.”

Cameron, who shares six children with Chelsea Noble, whom he married in 1991, was then asked how he would respond if one of his children were to come out to him as gay. “I wouldn’t say, ‘That’s great, son, as long as you’re happy.’ I’m going to say, ‘There are all sorts of issues we need to wrestle through in our life. Just because you feel one way doesn’t mean we should act on everything we feel.'” 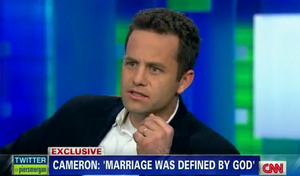 Cameron’s anti-LGBT stance is nothing new. When interviewed in 2008 on Fox’s The O’Reilly Factor, Cameron made his views clear when it comes to same-sex marriage in California and across the country. “It really comes down to who defines marriage,” he said. “It’s defined by God. None of us have the opportunity to redefine that without coming into serious consequences and unraveling the fabric of our society.”

The Gay and Lesbian Alliance Against Defamation has fired back at Cameron, launching #WhereAreTheyNow, a Change.org based campaign to tell Kirk Cameron he’s no longer an idol and that “it’s time to finally grow up.”

“In this interview, Kirk Cameron sounds even more dated than his 1980s TV character,” Herndon Graddick, senior director of programs at GLAAD, said. “Cameron is out of step with a growing majority of Americans, particularly people of faith who believe that their gay and lesbian brothers and sisters should be loved and accepted based on their character and not condemned because of their sexual orientation.”

The GLAAD campaign cites a 2011 study conducted by the Public Religion Research Institute that found the majorities of most religious groups favor allowing same-sex couples the right to marry. Among those, 56 percent of white Catholics, 53 percent Hispanic Catholics and 52 percent white mainline Protestants supported marriage equality. Mormonism and white Evangelicals like Cameron yielded the lowest support with 23 percent and 20 percent respectively.

When approached by TMZ for comment on the interview, Morgan said that Cameron’s response to his questions were “brave,” due to his much “antiquated” view.