In the pantheon of social types, there have always been the over-qualified and under-employed. These are the alphas that, never quite launching, end up using their iron wills and formidable charms to hold a kind of captive court. They are destabilizers and yet also controllers. They are powerfully magnetic and always great fodder for playwrights.

Grasping this particular nettle with equal doses of wit, insight and entertaining melodrama is Eugene O’Neill’s very long but very engaging Strange Interlude. In this tale of unfulfilled lives and loves, the thwarted alpha is the clever and formidable Nina Leeds, whom O’Neill presents at the defining moment of her fiancé’s death. In the throes of grief and frustration, Nina rebels against a needy father, and after a brief period of employment and promiscuity, throws her immense energies into the pursuit of ”happiness” via marriage and children. Though Nina overcomes all manner of obstacles to achieve her goal, her energies and manipulations are always and forever colored by the loss of her fiancé and the nameless chasm that yawns beneath it. 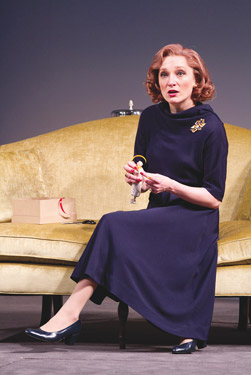 Thus, even as she strives for happiness, Nina brings great unhappiness. Is she a heroine or a villain? A victim or a perpetrator? An astute observer of the soul, O’Neill knows that the answer must be ”all of the above.” Such a damaged alpha will always be obsessed by what could have been, by what survival has necessitated, and by the very sensation of limitation on their powers. Should they be judged for a drive that turns ruinous when caged?

O’Neill thrusts us even deeper into this exploration with the use of Shakespearean-esque asides and mini-soliloquies in which, with a turn of the head or change in intonation, every character reveals their thoughts from moment to moment. Making for great insight and much humor, it also allows for a certain moral complexity: Does it matter what a person thinks if what they do seems to be ”right?” And what would Nina look like if her thoughts were as secret as they should be? Such fascinating questions remain intact all the way until the final scenes in which O’Neill ups the action but loses this emotional torque. Despite the intense journey, it seems almost as if he simply lost steam and ended it all, whatever it took.

As cerebral and exhausting as this sounds – and at nearly four hours this isn’t exactly dinner theater – don’t be deterred. Thanks to director Michael Kahn’s keen vision, inspired casting, skillful editing and beautiful pacing, the play positively flies. And to be sure, in true O’Neill fashion, the next witty line is never far behind the dire or the deep.

As the driven, indefatigable Nina, Francesca Faridany is absolutely stellar. Rivetingly handsome, extraordinarily expressive and channeling a turbo-charged charisma, Faridany embodies this living, breathing pulsar of a woman for nearly four amazing hours. When Nina stops amid a life she can never quite control and a happiness she can never quite win, to wonder with atheistic cynicism whether God must be a man or woman, Faridany captures with perfect pitch O’Neill’s restless, questing soul.

And though not every woman shares Nina’s Machiavellian drive or her damage, she speaks with magnificent clarity for all women who rail against limitation, self-imposed or otherwise, and for all who are at a loss to explain the joy and pain of the world. Indeed, everything O’Neill captures in Nina. From her practical view of her promiscuities to her emotional intelligence, it all carries an extraordinary female credibility. How many male playwrights can claim such territory? (And how many now would dare weave an abortion into a plot, let alone leave it free of moralizing or dire consequence?) This alone makes Strange Interlude extraordinary – both for when it was written (in 1928), and for how it resonates today.