If you like your slapstick shameless and your gags spelled out, yelled and repeated, ''Servant of Two Masters'' is pants-wettingly funny

At one point in the middle of the complicated hijinks of the Shakespeare Theatre Company’s The Servant of Two Masters, Truffaldino, the servant in question, turns to the audience and asks: Surely, after a season of Shakespeare and a Eugene O’Neill festival, we can keep up? Silly, irreverent but keenly on point, it was a moment of commedia dell’arte as it was meant to be: theater playing to its audience like a mischievous child.

Of course, by the time Carlo Goldoni wrote Servant in the mid-1700s, the genre was also known for its relevant satire, ribaldry, the novelty of its female actors (who occasionally bared a modicum of flesh), and its reliance on improvisation. And although the STC’s production, as adapted by Constance Congdon, absolutely – and very amusingly – captures the 21st century Washington zeitgeist, the proceedings appear, despite the hoots, howls and racing about, largely scripted. It is also notably thin on the scatological, the ribald and any satiric punches are not so much pulled as never thrown. Thus, though liberties are taken, as they should be with commedia, they are more a hand-hold than a grope. Call it commedia-lite. 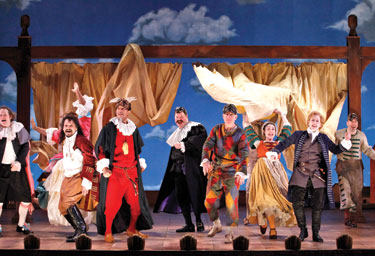 The Servant of Two Masters

And though commedia is a progenitor of all that is slapstick and vaudevillian, there is, without doubt, more than one way to skin a clown. So even as Chaplin, network sitcoms and musical theater may please one audience, so the rueful slapstick of Black Adder and the dark vaudeville of the League of Gentlemen will please another. As for this production, suffice it to say, if you like your humor telegraphed, your slapstick shameless and your gags spelled out, yelled and repeated, you will find the proceedings pants-wettingly funny. If you gravitate toward the other kind – well, forget it.

And yet, just as Truffaldino serves two masters, so this production serves two humors. If you can tolerate the madcap, you will be rewarded with Goldoni’s pinchy asides and all manner of Congdon’s (and perhaps the casts’) D.C.-insider/news-junkie goodies, which the cast toss out like so much hard candy.

It’s a bifurcated humor and it speaks much to the talent in this troupe (and they must be called a troupe on account of their convincing tour-bus camaraderie) that they manage it with tremendous agility. Mixing the vaudevillian with the wisecrack with the clever witticism, often in the same moment, is no small feat. And though director Christopher Bayes clearly has a taste for unadorned farce – which comes at the expense of some narrative clarity – he choreographs the chaos with enough care to ensure that both humors flow.

Multitasking the humor and carrying the show with good-natured irreverence is an indefatigable Steven Epp as Truffaldino, the servant who bites off more master than he can chew. Fully in his element, Epp brings out the best of Truffaldino’s wit with some extremely savvy timing while managing the Ringling Bros. humor with enough aplomb to keep one’s toes at minimum curl.

Bucking cliché is the other power player here. A striking Jesse J. Perez gives his dandified Florindo – one of Truffaldino’s masters – a kind of crazy charisma that is fresh, original and closer to the far more deviantly funny piece this could have been.

Rounding out this strong trio, if sometimes hard to hear under his mask, is Allen Gilmore as Pantalone, the patriarch determined to ensure that his daughter Clarice makes the best possible marriage. Though his scripted and lazzi moments are sometimes overcooked, overall Gilmore gets his half-sinister, half-harmless old man well into commedia (and sometimes even Fellini) mode with a clever mix of physical quirks, vocal acrobatics and a lot of character color.

THE SERVANT OF TWO MASTERS

Though a smaller role, Don Darryl Rivera gives his Il Dottore, father to Silvio, a striking comic energy and, like much of the rest of the cast, seems poised for a more off-the-wall rendering of the proceedings. As Silvio, his son, Andy Grotelueschen makes for an amusingly unlikely love object while Danielle Brooks, as his betrothed Clarice, plays for 21st century laughs with some expressive comic timing and, as it happens, a beautiful singing voice.

Though both memorable and charismatic, Rachel Spencer Hewitt as Beatrice, Truffaldino’s other ”master,” and Liz Wisan as Smeraldina, Clarice’s maidservant, keep it lively, but with no visible signs of wit. As Beatrice, who pretends to be her dead brother while she pines for Florindo, Hewitt plays it safe, delivering her lines with the earnest humor of English pantomime, but little in the way of irony. Wisan gives her maidservant plenty of oomph, but she’s one for the lovers of unadulterated vaudeville.

And though there is nothing whatsoever wrong with that (if you like it), those familiar with the more bomb-lobbing (metaphorically speaking) ribaldry of studenty versions of commedia will wish that director Bayes and adapter Congdon had taken this excellent troupe to the far more interesting place known, at least in Edinburgh, as the fringe.