Home / News + Politics / Out at the Ballgame

Out at the Ballgame

Time flies as enthusiastically as those errant fly balls, meaning it’s time once again for Team DC’s Night Out at the Nationals. In its eighth year, the annual outing sees thousands of LGBT and allied baseball fans heading to Nationals Park to enjoy a game en masse. To add to the excitement, D.C.’s Different Drummers will perform in the stadium’s plaza, and the Gay Men’s Chorus of Washington, D.C., will sing the national anthem.

”The Gay Men’s Chorus of Washington is getting the Team Spirit Award from the Washington Nationals,” says Brent Minor, executive director of Team DC, the umbrella organization for the area’s LGBT athletic organizations with a mission of dispelling discrimination against LGBT people and encouraging their participation in sports. ”I’m not exaggerating when I say, without question, the Nationals look forward to the Gay Men’s Chorus singing every year. They are a favorite of the Nationals. It’s their seventh year.” 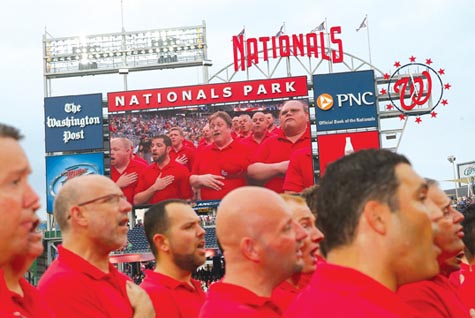 The chorus is also a favorite of those rooting in the stands. Another special guest participating in the pre-game festivities sure to get cheers is Lt. Brett Parson, the Metropolitan Police Department’s highest-profile gay officer and the former head of MPD’s Gay and Lesbian Liaison Unit.

Team DC also confirmed June 13 that Benjamin Jealous, president and CEO of the National Association for the Advancement of Colored People (NAACP), which recently endorsed marriage equality, will attend as a guest of the Night Out event, adding some national prestige.

Another national figure, a gay all-star on Capitol Hill, Rep. Jared Polis (D-Colo.) will be throwing out the first pitch to mark the occasion.

”This is a great event and I’m excited to be a part of it,” Polis said in a statement released by his office. “I’m an avid fan and play in the Congressional baseball game every year, so I’m ready to throw a strike for the first pitch.”

Though Polis has put in the congressional practice, Minor says the experience at Nationals Park may be a little ”nerve-wracking,” adding that Polis’s staff will be coming out to cheer on the congressman. His advice? ”You’d rather overthrow than throw it in the dirt.”

Aside from the fanfare and the camaraderie, Minor also promises that the Night Out game – sponsored by Metro Weekly, Miller Lite and Nellie’s Sports Bar, and pitting the Nats against the Tampa Bay Rays — is one for diehard baseball purists, too. Not only are the Rays playing a pretty good season, the Nationals are at the top of their game.

For a live look at Harper’s knock-out baby blues, be sure to bring binoculars.

Team DC’s Night Out at the Nationals is Tuesday, June 19, at Nationals Park. Pre-game ceremonies begin at 6:30 p.m. The game begins at 7:05 p.m. Tickets, $18, are available at Nellie’s Sports Bar, 900 U St. NW, or online at nationals.com/nightout. For group sales of 25 tickets or more, email news@teamdc.org.

[Editor’s note: This story was updated Wednesday, June 13, 11:20 a.m., to include the addition of Benjamin Jealous as special guest.]