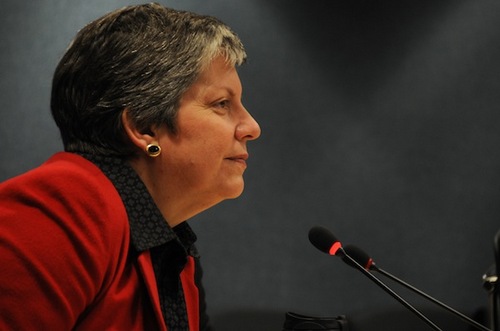 Almost two months after Democrats on Capitol Hill urged the Obama administration to recognize in writing binational same-sex relationships with regard to deportation proceedings, the Department of Homeland Security has announced it will do so.

“In an effort to make clear the definition of the phrase ‘family relationships,’ I have directed [Immigration and Customs Enforcement] to disseminate written guidance to the field that the interpretation of the phrase ‘family relationships’ includes long-term, same-sex partners,” DHS Secretary Janet Napolitano wrote in a Sept. 27 letter sent to House Minority Leader Nancy Pelosi (D-Calif.) and the 83 other Democrats asking for the recognition.

The announcement was immediately met with praise from congressional Democrats and LGBT advocates.

Pelosi applauded the response from Napolitano, stating it would provide clarity to those facing separation in immigration cases.

“From supporting marriage equality to seeking fairness in our immigration laws, the Obama Administration has embraced progress for LGBT families – progress that will and must continue,” Pelosi said in a statement. “Our nation is served when loving families are kept together.”

The July letter was the second attempt by congressional Democrats since September 2011 to persuade the Obama administration to make official what the administration promised in August: that gay couples would be given the same protections as straight couples in deportation cases.

In their second attempt to push the Obama administration for clarity, the 84 members of Congress wrote, “By issuing written guidance, DHS can keep LGBT families from being separated and thus prevent the irreparable, permanent harm to families that is caused by the so-called Defense of Marriage Act — discrimination the Department of Justice has determined to be unconstitutional.”

Under the Defense of Marriage Act, immigrants in relationships with Americans of the same-sex are denied various protections, including eligibility for green cards, because the federal government does not recognize such relationships.

According to Family Equality Council Executive Director Jennifer Chrisler, there are more than 36,000 binational same-sex couples living in the United States today. Nearly half of them are raising children.

“No parent in our country should be forced to make the heart-wrenching choice of whether to leave their spouse and children behind or whether to uproot their children from their schools, friends, community and extended families to settle in another country with more welcoming immigration laws,” Chrisler said in a statement.

Democrats on Capitol Hill have also tried to bypass the administration with legislation to ensure protections for binational same-sex couples. The Uniting American Families Act has support from many Democrats and would add the term “permanent partner” to several sections of the Immigration and Naturalization Act.

Although Pelosi praised the move by the Obama administration, she added that further steps, like passing the Uniting American Families Act, must still be taken.

“We have more to do: we need to pass the Uniting American Families Act and the Reuniting Families Act, to relegate DOMA to the dustbin of history, and to fight discrimination in all of its forms,” Pelosi said.

Chrisler agreed, describing the news as “one step” toward ensuring these families be treated with respect.

The Uniting American Families Act has gained traction, as well as its first supporter from across the aisle. Last week, Maine Republican Sen. Susan Collins broke with her party to become the first Republican senator to co-sponsor the bill, which would grant binational same-sex couples the same rights enjoyed by straight couples, including the ability for gay Americans to sponsor their partners for citizenship.

In a statement released last week, Collins said the bill would “help prevent committed, loving families from being forced to choose between leaving their family or leaving their country.”

READ the letter from Napolitano here.