By John Riley on October 22, 2012 @JohnAndresRiley 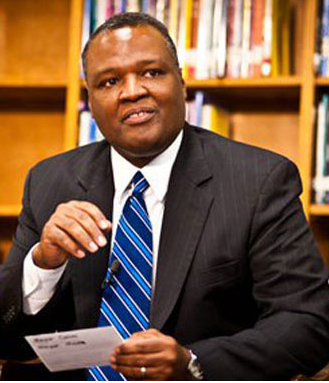 “It is my intention to vote in favor of Question 6,” Baker said on The Politics Hour, hosted by Nnamdi. “I do believe it is a civil rights issue, and so, on a personal level, that’s what I plan to do, and what I will do that in November.”

Proponents of Question 6 were elated at Baker’s announcement, which adds to the number of prominent African-Americans and Prince George’s County officials announcing support for marriage equality.

“County Executive Baker’s endorsement today of fairness and equality for all Marylanders explains why he is such a revered figure in PG County – now for more than two decades,” Sultan Shakir, political director for the Marylanders for Marriage Equality coalition, said in an Oct. 19 statement. “His voice will no doubt have an impact. We’re very grateful.”

Baker’s announcement makes him the 17th elected official representing all or parts of Prince George’s County to vote or express support for marriage equality, and one of at least 30 African-American elected officials from Maryland to do so.

Baker’s endorsement of Question 6 further dispels perceptions of African-Americans and residents of Prince George’s County as vehemently opposed to marriage equality. It also undercuts any potential attempts to exploit stereotypes or fuel misperceptions of being “gay” as a white phenomenon that somehow threatens the stability of African-American families or violates their religious beliefs, as some recent anti-Question 6 videos and fliers have attempted to do.

In addition to Baker, U.S. Reps. Steny Hoyer (D-Md.) of Mechanicsville and Donna Edwards (D-Md.) of Fort Washington, whose districts include large parts of Prince George’s, have also expressed support for Question 6. Lt. Gov. Anthony Brown, an African-American and a former state delegate from Prince George’s, has also been a vocal advocate of marriage equality.

When the Civil Marriage Protection Act was passed by the Legislature, 16 of 31 delegates and senators representing parts of Prince George’s voted in favor of it or expressed support for its passage. Among the 42 African-Americans in the Maryland General Assembly, 26 voted for the bill and another, Del. Veronica Turner (D-Prince George’s), had expressed support for it prior to being hospitalized during the final vote.

A Washington Post poll released Thursday showed 52 percent of likely Maryland voters in support of Question 6, compared to 43 percent who said they’d vote against the measure.

John Riley is the local news reporter for Metro Weekly. He can be reached at jriley@metroweekly.com
← Previous Story Latest Polling Continues to Show Majority Support for Question 6
Next Story → Grindr’s Political Bedfellows