”Bill is a genius,” says Chris Jennings. “The show epitomizes his genius. It’s the perfect blend of music, dance and theater — a completely unique theatrical experience.”

Jennings, managing director of the Shakespeare Theatre Company, is talking about Fela!, the popular Broadway musical co-written, directed and choreographed by Bill T. Jones. The Shakespeare Theatre has brought back the show, about the late, legendary Afrobeat pioneer and Nigerian political activist Fela Kuti, for a short run. Fela! kicks off its second national tour just as it did its first, in 2011, at the company’s Sidney Harman Hall, thanks to STC’s initiative – Jennings says the show was set to skip Washington both times otherwise.

”I’ve never seen dance like this within a theater production,” Jennings adds. 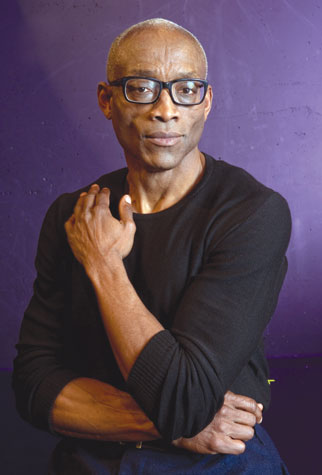 That’s definitely not the first time anyone has called Jones’s work unique. In fact, his repertoire has been built on a revolutionary spirit. And just as certainly, it won’t be the last. Actually, soon enough similar praise is sure to be said about Jones’s latest work, A Rite, a hybrid theater/dance piece. The work is a rare collaboration between two performing arts groups, the Bill T. Jones/Arnie Zane Dance Company and the theater group SITI Company, led by Anne Bogart.

”You have dancers who are acting, and actors who are dancing, and that’s pretty amazing,” says Bogart, about the piece’s cross-disciplinary approach. ”I hope it’s breaking new boundaries.”

A modern adaptation of the ballet The Rite of Spring by Igor Stravinsky and Vaslav Nijinsky, A Rite premiered last week at the University of North Carolina, Chapel Hill. When the now-classic The Rite of Spring debuted 100 years ago in Paris, it was met with disdain, provoking strong reactions for the avant-garde nature of its music and choreography, and for its pagan story. Commissioned by Carolina Performing Arts and now touring the country, including a stop next week at Maryland’s Clarice Smith Center, the new A Rite finds ”two communities coming together, an acting company and a dance company,” explains Bogart, ”working together and creating one community.” In an early review, The New York Times dance critic Alastair Macaulay called A Rite ”a serious, intricate, multidirectional centennial tribute to a work of art whose spell it deepens.”

Jones, you could say, has been putting dance lovers under his own spell for over three decades now. He started his dance company with Arnie Zane in 1982, after Jones and Zane had met and fallen in love in college. Jones, who grew up in western New York, was on a track scholarship at Binghamton University. But he quickly shifted gears from running to twisting and leaping, dancing solo and with Zane. After Zane died of AIDS-related lymphoma only six years into their artistic partnership, Jones threw himself into his work. Among other products from his mourning period, Jones created the moving piece Absence in memory of Zane.

In the decades since, Jones has gone on to great acclaim and success – without ever shying away from controversy or being honest and frank about who and what he is. For one thing, Jones has been openly gay from the start of his career. He also hasn’t flinched from discussing his life and health as an HIV-positive man.

In fact, if it weren’t for the advance of age, the healthy, incredibly fit Jones, who turns 61 the day after Valentine’s Day, would surely still be dancing. But older bones rattle a little louder and take longer to mend than those of a younger man. So these days Jones’s focus is on choreography, chiefly for his company, the Bill T. Jones/Arnie Zane Dance Company. In 2011, the company teamed up with Manhattan’s Dance Theater Workshop to create the performing arts venue New York Live Arts, where Jones is executive artistic director. Jones sees the organization as one way of giving back, as he puts it, to ”the field that made me. New York Live Arts is devoted to cultivating progressive, if you will, avant-garde people: body-based artists at every stage of their career.” The venue, in Chelsea, is also now the permanent home for Jones’s dance company.

Of course Jones has become best known over the past decade for his work on the Great White Way. He’s now two for two at the Tony Awards for his choreography: winning in 2007 with Spring Awakening and 2010 with Fela!

Certainly his work on Broadway solidified his selection in 2010 as a recipient of the Kennedy Center Honors, the nation’s leading award honoring a lifetime of achievement in the arts.

”The very, very best are not content doing good work, or popular work. They insist on being revolutionaries,” said playwright Edward Albee, a 1996 Kennedy Center Honoree, in recognizing Jones’s work at the Kennedy Center ceremony. Albee continued: ”If you meet Bill T. Jones, what do you see? Well, you see a man of only a little bit more than average height. But then you watch him, Bill T., dance. And you see his amazing choreography. And you begin to realize that Bill T. Jones, indeed, stands taller than most other men.”

For her part, and also at the Honors ceremony, actress Claire Danes, who got her start in New York’s theater and dance scene, succinctly summed up Jones’s influence: ”Bill T. Jones is, simply, an inspiration.”

In the past couple weeks Jones has been consumed with A Rite, getting it in shipshape and ready to tour. But he took some time out to talk to Metro Weekly by phone from North Carolina, days before the piece’s world premiere – and one day after President Obama’s second inauguration. The president’s incredibly pro-LGBT speech, and how ”it will play” among Jones’s more homophobic African-American brethren, almost beat out A Rite as the topic at the forefront of his mind.

METRO WEEKLY: I understand you are not in your company’s new piece A Rite coming to the Clarice Smith Center.

MW: You don’t dance much these days?

JONES: No, I don’t really. I dance when I’m very happy. And in special situations. I danced at our company gala, at the New York Live Arts, a month or so ago. If there’s been a beautiful performance and the audience is warm, I might do something impromptu. Or I dance when my companion is making a lovely dinner. Or with friends and a bit drunk.

MW: But not onstage in a performance.

JONES: No, I have not of late made pieces for my body. I would like to do it. I intend to do something. I have to be careful I don’t break anything. The ankles and knees and lower back are those of a 61-year-old man. My body is in good shape, but I can’t writhe it like my dancers do every day working six or seven hours up on their feet, and stretching and bending and jumping. I don’t long to do that. It has to be somehow different. It has to be another ritual of sorts.

MW: When did you last dance onstage?

JONES: Six, maybe seven years ago, a solo I did at the Louvre in Paris, called ”Walking The Line.” That was my last official public performance.

MW: Since then, you’ve gone on to greater public recognition, including successful forays on Broadway. But receiving the Kennedy Center Honor in 2010, alongside Oprah Winfrey and Paul McCartney, must take the cake.

JONES: Oh, please, I felt a bit like Mr. Obama at his second inauguration. As he was leaving, he turned around and said, ”I’ll never see this again.” Well, it almost felt that way for me. [Laughs.] You know, being honored, by the president and at the Kennedy Center. I don’t expect to have that repeated in this life. You can’t get many more honors like that.