Matt Bronson, Mr. MAL 2012, rocketed to the title-holding top in no time

Even if Bronson’s leather gear that night was all borrowed, the fun didn’t stop there. First, enjoying some time off in Rehoboth, he hit the Double L Bar, the beach resort’s leather/Levi headquarters. Getting caught up in the fun of the Mr. Double L 2011 meet and greet, Bronson decided to take the plunge. And while he didn’t win, he did place second. The next win came with Mr. Pittsburgh Leather Fetish. And then Mr. MAL, which primed him for participating in the International Mr. Leather 2012 contest in Chicago.

”I had a great time,” says Bronson, even if he didn’t win a third title at IML. ”You meet so many people from around the world. It’s huge. If I compare them, it’s like MAL is my local leather bar and IML is a huge dance club – and both great experiences.”

Although he may have those schoolteacher summers at his disposal, taking on the responsibilities of another high-profile title might have run this poor Pennsylvanian ragged.

”My life has been so exciting,” says Bronson, granting it’s probably a good thing he’s been single on this leg of the journey. ”I’ve been busy every weekend the past year. … I was often called to come in and raise money. My goal was to get out to as many local events as I could, to go out and support them, because they’ve done so much for me.”

That’s meant stepping up for victims of Hurricane Sandy and raising money for an LGBT youth center in Pittsburgh. Right here in D.C., that philanthropy manifested itself at the annual Scarlet’s Bake Sale, held in February at the DC Eagle. What’s the bid on a Mr. MAL 2012 cockring – as well as the towel guarding his privacy during its removal? Combined, Bronson brought in $550 that afternoon to help Pets-DC and Baltimore’s Moveable Feast.

Those busy weekends will likely come to an end after Bronson steps down, making way for Mr. MAL 2013. He says it will be a weekend of sadness, with his year coming to a close, but also of excitement and of friendship. He also grants that it will be nice to throttle down and finally spend some weekends just relaxing with family and friends. Maybe he’ll even find the time to take up the piano or learn that new language. However Bronson manages to fill his time, he knows the last year will be with him forever. 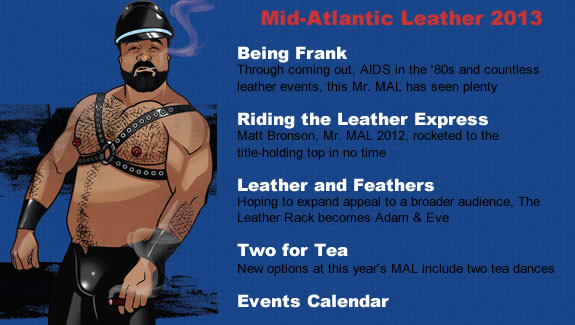