Matt Bronson, Mr. MAL 2012, rocketed to the title-holding top in no time

Bronson would be the first to point out, however, that this is not a weekend of leather luminaries and their fans. Nope, this is all about community. It shows in the advice he has for those contestants he’ll be judging in the 2013 tourney, as well as for the leatherman who eventually wins the title. 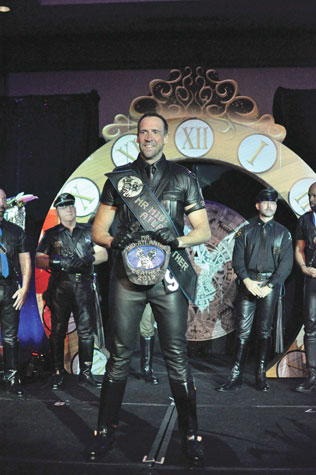 ”Be yourself,” he advises. ”Don’t be pretentious. Be approachable. People want to come up and talk to you.”

So that’s just the type of titleholder Bronson has been, both as Mr. MAL 2012 and Mr. Pittsburgh Leather Fetish 2012. But with just a couple years as a leather aficionado, there’s not much more he can suggest. Bronson’s not taken a slow climb to the top through all the intricacies of leather living, the protocols and nuance. His leather journey has been more a nonstop rocket ride.

”Before I really got into the leather community, I was actually going through a rut,” says the 47-year-old Allentown, Pa., schoolteacher. ”I was thinking about taking up a language or piano. Then this happened, and my life has been on fast forward.”

But how did it happen? Is not like there is a Hunger Games sort of lottery plucking the vanilla-minded out of their living rooms and dropping them into dungeons. Bronson just always liked leather bars – the friendliness, the outgoing attitudes of patrons, the ease of conversation.

”They always seemed the most down to earth, genuine people,” Bronson says of visiting leather bars across the Northeast. ”That’s what kept me going back.”

And that’s what laid the foundation for what came next.

”About two years ago with a friend I was dating at the time, we decided to go to The Bike Stop in Philadelphia in full leather gear,” Bronson explains. ”I just had a blast.”