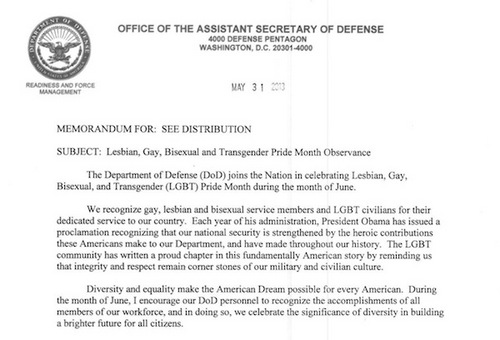 The Pentagon will again commemorate June as LGBT Pride Month this year, according to a memorandum distributed by the Defense Department office that oversees diversity.

In the memo dated May 31, 2013, Clarence Johnson, the director of the Pentagon’s Office of Diversity Management and Equal Opportunity, wrote, “We recognize gay, lesbian and bisexual service members and LGBT civilians for their dedicated service to our country.”

According to Johnson, “The LGBT community has written a proud chapter in this fundamentally American story by reminding us that integrity and respect remain corner stones of our military and civilian culture.”

The nation’s leading LGBT military organization praised the Pentagon’s continued celebration of Pride Month as sending an “important message all the way down the chain of command,” but took issue with the remaining ban on transgender Americans serving in the military.

“Transgender people have served this nation with pride, honor, and distinction – and continue to do so in the hundreds, if not thousands,” said Allyson Robinson, executive director of OutServe-SLDN, who is an Army veteran and transgender herself, in a statement. “It’s past time to honor them for their service and sacrifice, and past time to end the discredited and obsolete practice of forcing them to serve in silence and fear.”