Aisha Tyler's busy life may have cut into her playtime, but it's not quelled her love of games

“The Walking Dead, that game broke me.”

Aisha Tyler is sitting in a cramped, cluttered side room within the Ubisoft encampment at E3, the video game industry’s massive annual expo, talking about a game that took her emotions by complete and utter surprise. 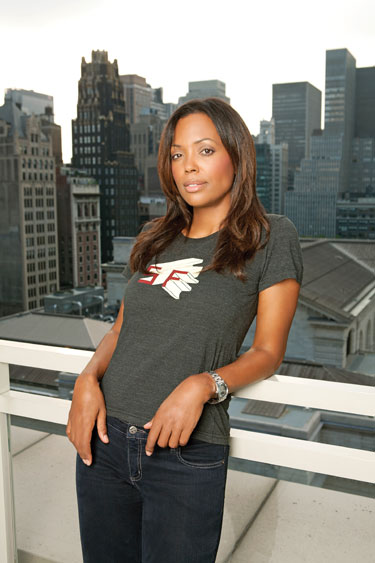 “It’s funny because people were online saying, ‘Get ready to feel stuff,’ and I was like, ‘Pfft, I don’t feel stuff, I’m dead inside.’ My husband was one chapter ahead of me — he was visibly upset and I was like, ‘You need help.’ We were both playing side by side [on our iPads] in bed, and he looked over, and I was just crying hysterically. He said, ‘You just finished the game.’ The gameplay was really, really simple, but it was really, really affecting. I think it goes to show with rich, complex narrative, even limited gameplay can be really enjoyable.”

Tyler is well-known as an avid gamer — so much so that game publishing giant Ubisoft tapped the 43-year-old to host its major press conference at this year’s E3, held last June. The comedian’s life has gotten to the point where she’s so incredibly busy with so many varied things, she barely has the time to play games as immersively and completely as she once did. She’s a panelist on CBS’s daily gabfest, The Talk; her second book, Self-Inflicted Wounds: Heartwarming Tales of Epic Humiliation released in July; she’s hosting the revitalized improv comedy show, Whose Line Is It Anyway?; and she helms Girl on Guy, “a podcast about stuff guys love, brought to you by the ultimate guy’s girl.”

And then, of course, there’s Archer. Tyler voices Lana Kane, the only competent employee in the Isis canon of drinking, cursing, sex-minded secret agents. Lana is the hit show’s voice of reason, and Tyler’s delivery is laced with a delicious cynicism and exasperation at the antics of her former beau, Archer, and her bungling, self-absorbed colleagues. “Smart, occasionally filthy, thoughtful stuff for grownups,” is how she describes Archer. “That’s what we’re most proud of — that it’s a smart, really, really dirty show for adults. We just recorded Episode 1 of Season 5 and this is going to be a bananas season. Bananas, bananas. Everyone’s losing their mind.”

On this day, however, Tyler is of sound mind and glad to give over a bit of her time to discuss her passion for gaming, a passion that formed at a young age. She loves shooters and especially loves one form of gameplay above all else: cooperative play.

Of course, Tyler loves competitive play, as well — but for different reasons.

“I like to play competitively with my friends and try to shoot them in the face,” she grins. “And then laugh at them.”

METRO WEEKLY: You’ve been an avid gamer for years, but you’re also intensely busy. How do you find time to satisfy your gamer?

AISHA TYLER: That’s the governing question of my entire life right now, because I love playing so much. When I only had one job, rather than five, I gamed more like most people game: Come home on a Friday, don’t move till Monday morning, really immerse myself in a game, play an entire campaign in a weekend. I don’t have that kind of time anymore, and it’s really sad, actually. So my gaming is more furtive. I’m bummed about my lack of playtime.

MW: What types of games grip you most?

TYLER: People can interpret this any way they like, but I really only like to play first-person and third-person shooters. Those are the games that speak to me. I don’t know what that says about me, but by limiting the kinds of games I play, it concentrates my gaming choices and limits them so that I’m not frustrated about not being able to play everything I want to play.

I’m also a franchise player. If I fall in love with a franchise, I’ll play the franchise all the way through. Halo was my gateway console game — that’s the game I play multiplayer most with my friends. Then I got into Gears of War — I especially love Gears because I thought that narratively it was one of the most cinematic games I’d ever played, especially by the third game. That was a really wonderful, sad, beautiful game. I try to play games that are rich in terms of competitive play and also that are narratively rich, because if you’re going to spend hours and hours playing something, the story shouldn’t suck.

MW: What about gaming draws you to it more than, say, going home and just picking up a copy of the latest bestseller or watching a movie?

TYLER: I love to read. I love films. But there’s just something so rich about the pseudo-physical activity of being inside a video game. I feel like video games are as immersive as a film can be, and as immersive as a book can be and as great as the pictures in my head can be. When you have a really beautiful, well-built, fully realized game, it’s so beautiful and it’s so rich that there’s an immersive quality to gaming. I think that’s something different that films and books can’t deliver.

MW: There are people who say “Video games aren’t art, they’re just a sidetrack, a hobby, a small thing.” How would you respond to them?

TYLER: [Laughs.] God, I have a lot of words I probably shouldn’t say in print. You can’t make some people curious. You can’t make them open-minded. If gaming isn’t for you, it’s not for you, I get it. But to call it not art when these worlds are so rich and so elaborate and so robust and so detailed…. And I haven’t even probably seen all the most beautiful games that are out there. Anybody who claims it isn’t art doesn’t understand art, doesn’t understand the complexity of art. I love all kinds of art — I feel like the word art is all-encompassing. It’s really about creative expenditure, creative output. These guys work incredibly hard and they’re making a painting that you can navigate inside and that’s pretty extraordinary. A film is a very precise narrative path that someone has chosen and you’re sitting back and letting an artist take you on a ride. What’s great about games is that you’re able to choose that ride for yourself over and over again and have it end differently every time. Eventually we’ll all be in haptic suits and walking inside these places.

Randy Shulman is Metro Weekly's Publisher and Editor-in-Chief. He can be reached at rshulman@metroweekly.com.
← Previous Story Launch Pad: Xbox One vs. PS4
Next Story → Game Change: The State of LGBT Gaming