It's a Thin Line

It is hard to see Yael Farber’s play Mies Julie without reflecting on J.M. Coetzee’s extraordinary novel Disgrace. Both set in post-apartheid South Africa, each in its own way grapples with the complexities, paradoxes and unaccountable emotions of a legacy of brutal colonial rule. Yet whereas Coetzee approaches the fallout of apartheid from the oblique angles of a morally adrift white man, Farber, in her adaptation of Strindberg’s Miss Julie, delivers her take head-on, one-on-one, in a resolution so high it’s almost surreal. Freed from the sterility of headlines and rich with insight, both are works that do not try to explain the unexplainable, but they do, in their way, frame it.

Having said that, some will without doubt prefer the intellectual and emotional subtlety of Coetzee’s exploration of apartheid’s second act, even with its insidiously unsettling revelations. Raw and explosively theatrical, Farber’s treatment sits at the other end of the spectrum. Intense, bloody and fully conversant with the trend for increasingly realistic simulated sex, it is not for the faint of heart. It is also far more obvious, with cues and clues to history and events offered with regularity by the characters and, at times, a certain predictability and derivative feel – this is not the first drama to grapple graphically with interracial love and sex. It is also a piece that walks the line between a realism that brings pathos and a mild existentialism that suggests bigger ideas; it’s a balance that does not always work and a challenge the actors cannot always meet. 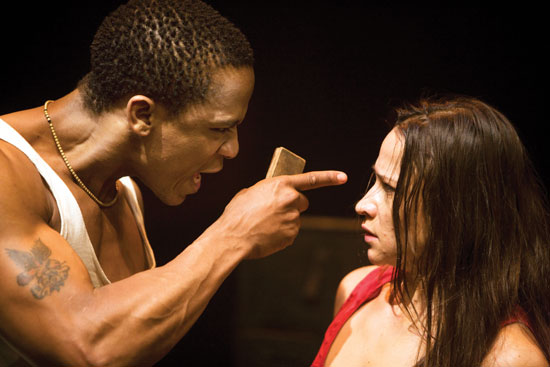 And yet for those who can get past these distractions, or see them as the price of admission, this is a powerful and profoundly visceral vision of all that is possible and impossible and all that is hopeful and corrupted in contemporary South African life. In other words, whatever the headlines may or may not tell us, reality lives in the intimacy of what real, non-newsworthy people endure daily in the rewards and ruins of the post-colonial era and this is where Farber digs deep.

Seen through a single fateful night in the kitchen of a rural farmhouse, Farber sets her storm of social, political and gender dynamics into play with the troubled Mies Julie, daughter of the absent farm-owner. Stalking the room like a caged animal, she is fixated on John, the young black man who has worked the estate since they were children. As the needs of each surface, dive, delude and finally explode, the moonless night ebbs and flows with the songs of restless ancestors and the very real disenfranchised.

And sound and music are a large part of Farber’s vision, with the saxophone and synthesizer of Daniel and Matthew Pencer creating a haunting sense of ancient mystery and danger reminiscent of the affecting scores of films such as Alan Parker’s Angel Heart and Peter Weir’s Last Wave. As John and Mies Julie, the beautifully athletic Bongile Mantsai and Hilda Cronje, are as fully choreographed as dancers and they bring much artistry to the violence of emotion and eroticism that invests their encounter. But, again, Farber makes a choice; like the existential verbal exchanges, these stunning bodies and their extraordinary movements take from the realism and it’s a trade-off that dampens the pathos.

As Mies Julie, Conje aptly captures a sexual frustration that is inextricably bound to the frisson of an unsettled soul. A bold and erratic portrayal, she does much to surmount the challenges of the character. And there are challenges, for Julie is very hard to read. Is she mentally ill? Is she a symbol of the white oppressor? Is she her father’s pawn? Probably all three. But in declining to define Julie with greater clarity, the erratic way in which she pinches and pets, the extremes of her behavior, Farber makes her more a vehicle than a viable human being. Every gesture she makes – of antagonism, love or despair – produces a reaction in John that speaks to the legacy of their history, but not to her. Indeed, we learn more about Julie in her brief, poetic memory of the smell of her mother’s hair, than we do in all her extremes and provocations.

A tremendous stage presence, Mantsai is at once larger-than-life and yet full of credible conviction. It is his convincing emotional honesty that drives much of the play’s momentum, even as he seamlessly manages some very complex choreography. This John looks as if he is actually thinking, calculating, wondering at the woman that has set him in her sights.

In a small but memorable role as John’s mother, Christine, Thoko Ntshinga beautifully depicts a woman bound to her ancestors and the land they once owned even if it means a life of subservience and spiritual compromise in the here and now. Her eyes speak volumes, expressing everything of the despair and endurance of the survivor. As the Ancestor as well as singing and playing traditional African musical instruments, Tandiwe Nofirst Lungisa moves through the play offering a quietly powerful presence and a reminder that, for many South Africans, there is a continuum older and more enduring than any one conflict in time. And it’s this unflinching vision of what it means to steal not just land, but a people’s history and potential, that makes this play another powerful voice for South Africa.