By Justin Snow on November 4, 2013 @JustinCSnow 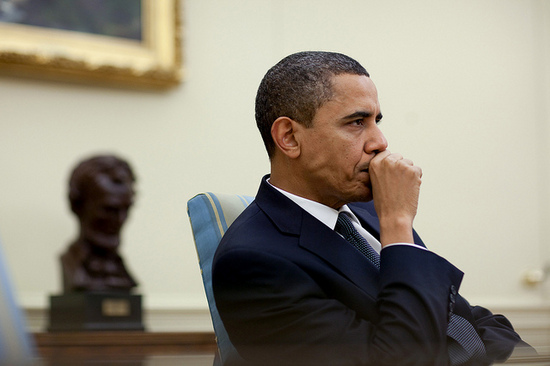 President Barack Obama applauded the U.S. Senate for advancing the Employment Non-Discrimination Act Monday evening, telling supporters at a fundraiser that progress is being made toward a more tolerant nation.

“I want everybody to understand that change in America’s always been slow, and sometimes we take a step back for every two steps we take forward. But inexorably, the idea of a more tolerant, more prosperous, country that offers more opportunity to more people, that’s an idea that the vast majority of Americans believe in,” Obama told about 60 supporters at an Organizing for Action dinner at the St. Regis Hotel in New York City, according to the White House pool report.

Obama admitted that an uphill battle will remain in the Republican-controlled House of Representatives, much as there has been for immigration reform.

“Slowly, surely, we’re starting to see a some common sense starting to prevail. It hasn’t quite gotten over the hump, but you’re starting to see it in the Senate in particular where we had already gotten the vote on immigration reform. Bipartisan vote, it’s ready to go. We still need help from the House, but there’s still an opportunity. We’re seeing it perhaps tonight on the ENDA vote, which, you know, non-discrimination around sexual orientations where we think we’ll probably get this done in the Senate. Again, there’s going to be resistance in the House,” Obama said. “But the more that we can continue at a grassroots level to speak out on behalf of the values that we care about, they’re mainstream values, the values that 60, 70, 80 percent of the country believe in. They’re also values that young people and future generations believe in.”

The Obama administration had described passage of ENDA as “long overdue” and urged swift passage in a statement of administration policy released before the Senate vote. In a statement released after the vote, White House press secretary Jay Carney said Obama “thanks the lawmakers from both sides of the aisle who have stood up for America’s core values of fairness and equality, and looks forward to the Senate’s consideration of ENDA. He also encourages lawmakers to ensure that the legislation remains true to its goals as it is considered.”