By Randy Shulman on January 3, 2014 @RandyShulman

Sometimes change occurs in the most innocuous of ways. Like, say, at a big gay dinner where a couple of friendly, fit gay strangers extol a diet — a way of life, in fact — that, after the booze has fully evaporated from your system the following day, remains lodged in your short-term memory. Stubbornly lodged. To the point where you can’t think of anything else. (Of course, you realize that may be the result of your undiagnosed OCD, but no matter.) So, this diet/way of life becomes something you decide to explore. It intrigues you. It makes you wonder if it can indeed be done without serious mental turmoil. So you explore. At first, gingerly. Later with gusto. Then, later still, you back away at the absurdity of it all. No, no, no, no! This can’t work! I miss blocks of cheddar! I need pickles! Who the hell can live without Tostitos?! But then you realize that maybe it’s not so bad after all, and that compromises can be made, goals can be met, weight can be lost. You commit. Why not?

It happened to me about a month or so ago at the National Gay and Lesbian Chamber of Commerce National Dinner, a lavish affair held annually at the majestic National Building Museum. It so happens a few of my tablemates actually knew how to engage in engaging conversation. We talked movies. We talked Gaga. We talked The New Yorker, because that’s something I force everyone I meet to talk about. Before long, we were talking food. Turns out, they’re on this super-strict eating regimen: Paleo, or, in less intellectual terms, The Caveman Diet. As they explained it, they could only eat what our Paleolithic ancestors would have devoured, as our bodies were still genetically wired to respond favorably to that kind of food. “Say I went on this diet,” I asked. “Would I have to give up my nightly blocks of cheddar cheese?” Apparently so. Pickles are also verboten, as Paleolithic man did not yet have access to Ball mason jars.

Diets generally don’t interest me — if they did, I wouldn’t have ever gotten to the 205-pound blimp stage. And yet, a funny thing happened to me two years ago when my longtime partner and I called it quits after nearly two decades. I stopped eating bread and cereal and pasta and grains and rice. All of it. Just stopped. Amazingly, a year or so later, I was down to a relatively svelte 170 pounds, with a waistline that had decreased a full four inches, from 38 to 34. The most dramatic change came to my face, however, as I welcomed back an old friend: my jawline.

I’ve since started breads and grains again without any adverse weight gain. On the other hand, I have not had any further loss. I’ve been trapped at 170, and no matter what I do — walk leisurely on the treadmill, visit my personal trainer and ask him to show me every exercise repeatedly until it’s him who’s had the awesome workout — I can’t get the scale to dip below the 170 mark. And I really want to get to 160. And perhaps even 155. Below that, I’m in Walking Dead terrain. I don’t want to lose the weight for reasons of vanity — although that certainly is a motivator — but for general health reasons. I’m at that age, you see, where people start dying of little things that go wrong, like clogged arteries and brain tumors. And it’s freaking me out. So bring on the lifestyle change. I’m kind of, sort of, more or less ready for it. Kind of. 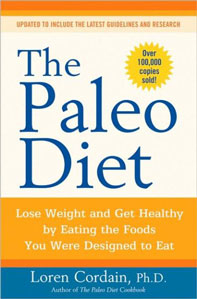 The point is, I was so taken with my new three-hour-only BFFs pep talk — ignoring all their hooting and hollering about the rigorous joys of Crossfit training — that the next morning I immediately bought two Paleo books on my iPhone: The Paleo Diet and The Paleo Diet Cookbook, both by Dr. Loren Cordain, an expert in a field that has made him exceedingly wealthy. I briefly considered The Paleo Diet for Athletes and then, after recalling how many tossed softballs I cowered from as a teenager, came to my senses.

I spent the next month poring over the books, absorbing all I could about Paleo – its tenets, its benefits, its recipes. And you know what I learned? That diet books contain a lot of padding. A lot. Once you’ve been informed of the basics, there isn’t all that much to tell, so Cordain keeps repeating things. Impressive, considering that you can say “Don’t eat cheese” only so many ways. After a while, I kind of hoped for a murder to spice things up in the narrative. But the only things murdered in the Paleo Diet are the foods we have been trained by modern society to love, crave and cram our faces with until the diabetes takes hold.

So, what did I learn about Paleo?

No wheat, bread, grains of any kind.

No dairy of any kind.

No legumes, including potatoes, peanuts and, presumably, Cracker Jacks, of any kind.

No salt, sugar or processed foods. >No pickles or vinegar or, God help me, salad dressing from a bottle.

Limit your oils to olive, flaxseed and massage.

Eat all the lean meats and seafood you want.

Eat all the fruits and non-starchy vegetables you want.

Do all this and, congratulations, you’re a caveperson.

Do all this rigorously, and the following things may actually occur:

You may lose weight.

You may feel better overall.

You may start to taste food differently, presumably in a better way.

You may improve the effects of a chronic illness such as diabetes or Irritable Bowel Syndrome.

You may become better at cave paintings.

You can even cheat on the diet. In fact, it’s encouraged in moderation so that you don’t give up on the bigger picture. So, go ahead, have that rasher of bacon and jar of pickles today. Because tomorrow you’re back on the raw broccoli and organ meats.

I was going to officially start the diet on January 1, 2014. But then I passed by my local McDonald’s, where I was tempted by a giant sign that read, “Buy a Big Mac or Filet-o-Fish, get a second Big Mac or Filet-o-Fish for a Penny.” Frankly, McDonald’s should pay us to eat their food, but that’s not the point. It was just too good a bargain to pass up. So I partook. Twice. Once on Dec. 31 and then again the morning of Jan. 1, largely because I missed the breakfast featuring two Sausage McMuffins with Egg for $3. (“All we have left are Steak Bagels.” No thank you.) I then decided my last day before going full-on Paleo be filled with comfort foods. So I ate a jar of garlic dill pickles, had two 3-ways, which, for those of you who are not aware, has nothing to do with sex and everything to do with a delicious brand of chili known as Cincinnati, heaped on spaghetti and piled high with fluffy, grated cheddar cheese. It is God’s way of making up for John Boehner. I also had an onion. Yes, an onion. More about the incredible benefits of the onion one day, perhaps, but not now. Now I’m launching into Paleo-world. Think of my chronicle as a Jurassic Park for Foodies.

Though I’m not really sure that’s a good thing….

Follow @randyshulman on Twitter for all his latest Paleo updates and for a bunch of other stuff you won’t likely care about and can easily ignore.

Randy Shulman is Metro Weekly's Publisher and Editor-in-Chief. He can be reached at rshulman@metroweekly.com.
← Previous Story 30 Minute Upper Body Workout
Next Story → 5 Rules for Your Gym Regimen