An "iWatch" is becoming more of a certainty, but shrouded in the same secrecy as every product launched by Apple

There are those who won’t take notice of a product category until Apple wades into it. The Cupertino, Calif.-based company is famous for closely studying market trends and competitors before baking its own fruity offerings, which consumers either didn’t know they wanted or hadn’t realized could work in the way Apple thinks they should. Tablets existed long before the iPad, but they were business-focused and had numerous drawbacks. MP3 players existed before the iPod, but Apple — after a few revisions, it should be noted — crafted a winning combo in iPod with iTunes. The Mac pioneered the personal computer and, while still in the shadow of a certain Microsoft competitor, continues to flourish.

And, of course, there’s the iPhone. Regardless of personal proclivities, there’s no arguing the impact Apple had on the smartphone market. Out went the stylus, in came the finger. Out went Windows Mobile and Blackberry, in came iOS. Out went rubbish proprietary software, in came the app store (and a tidal wave of all-too-easy-to-make charges to our credit cards as we ate up apps and games). Apple innovates, refines and borrows ideas like few other companies on Earth.

It’s what makes the prospect of an Apple smartwatch a very curious thing indeed. Smartwatches, yet again, aren’t a new thing. They’ve been around in varying degrees for a number of years, but they really hit the public consciousness with products like Pebble’s e-ink watch and Samsung’s Galaxy Gear — which, if anything, has capitalized on an emerging market in a very Apple-esque way. Mindshare and market share are very much in the Gear’s favor at the moment, as Samsung bombards the world with images of the Gear as a natural companion to its all-conquering Galaxy smartphone range. 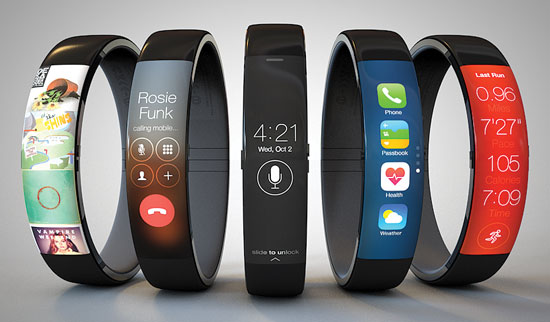 Regardless of what is out there at the moment, there are those who will decry smartwatches and staunchly refuse to try them — until Apple releases its own. Rest assured, Tim Cook’s company isn’t sitting out the smartwatch fad. Instead, Apple is doing what Apple does best and watching, researching, borrowing concepts and improving ideas. The Apple smartwatch — or “iWatch,” as it’s very likely to be called — is becoming less of a possibility and more of a certainty.

Last year, Apple filed for the trademark iWatch in Taiwan, Mexico and Japan. A patent-application for a watch-like device made the rounds, featuring an AMOLED screen, slap bracelet and end-detection user sensor. Bloomberg suggested a year ago that more than 100 employees were working on a watch device of some kind.

This is all bolstered by recent moves at the firm. Jay Blahnik, who consulted with Nike during the development of its fitness-tracking Fuelband, joined Apple last August in an unspecified role. TheÂ Financial TimesÂ stated that the company was “aggressively” hiring to help it get the iWatch ready for release. Apple met with FDA regulators to discuss mobile medical applications, which gives strong nods toward health-monitoring tech in any smartwatch that is released.

That handily coincides with a report from 9to5Mac that states that a new app called Healthbook will reach iOS 8, and monitor various fitness stats like steps and distance traveled and health metrics such as blood pressure and heart rate. It also ties in with the new M7 chip inside the iPhone 5S, which utilizes the handset’s various sensors to constantly monitor motion data. When paired with an iWatch, it’s speculated that iOS 8 will monitor “several other pieces of health and fitness data.”

Really, though, there are two things that guarantee Apple will enter the smartwatch market. The first is obvious: money. As the most valuable company on Earth, Apple loves making money — offering yet another device that fans of the company can queue for and spend hundreds of dollars on is a relative no-brainer. The second is more competitive: Samsung. The Korean manufacturer has locked horns with Apple in every market that Apple competes in, and with a Samsung-made smartwatch tempting consumers, Apple will be hungry to offer their own product to stop any more money reaching the pockets of its corporate nemesis.

Of course, as is Apple’s way, the company has refused to comment on any questions regarding the development of an iWatch, shrouding its wearable’s design in the same secrecy as every product launched by the company. Some publications report that we’ll see a smartwatch from Apple by the end of this year, but of course this is still very much part of the rumor mill. Large pinches of salt all round, please. There’s no doubt that Apple will be releasing a smartwatch — with no definitive date, though, all that those who are interested can do is wait for an announcement, get ready to remortgage a limb and join a queue at their closest Apple store.