Clash of the Titans

''Titanfall'' is a welcome drink of action and excitement 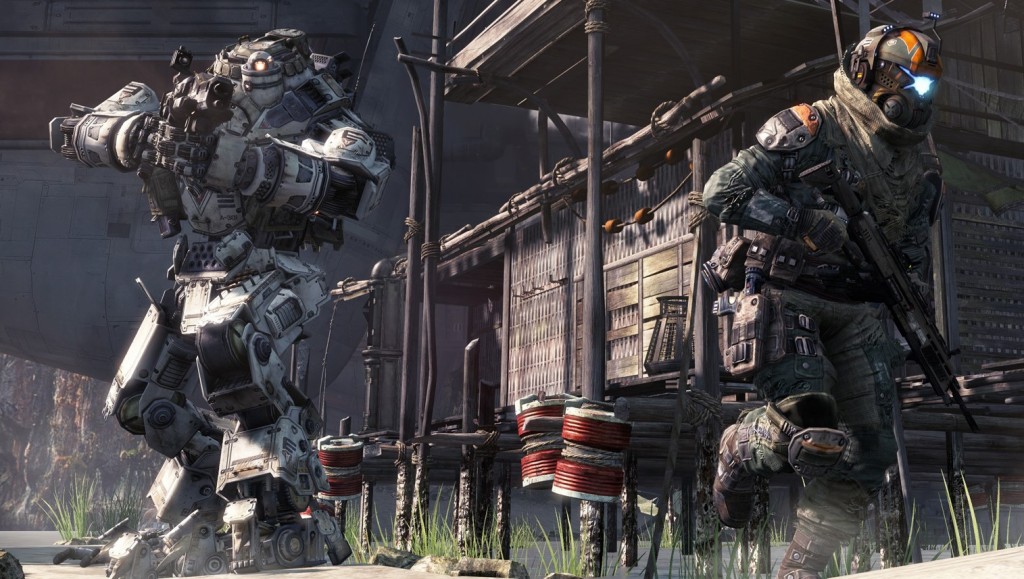 I’m going to cut through a little of the hype surrounding Titanfall, the first-person, multiplayer shooter from Respawn Entertainment. It debuted to rapturous acclaim at E3, with many publications claiming it to be the best game of E3, and Xbox One’s “killer app.” That hype has carried through to launch, with near-universal praise for Titanfall. Let me say this: Titanfall is worthy of its commendations. It’s an excellent game. It’s not, though, the game-changing, generation-defining experience some have stated it to be. It may sway some into choosing the Xbox One over its PlayStation 4 rival, but PS4 owners shouldn’t feel too dismayed that they can’t play it, as they’ve got plenty of great exclusives on the horizon. Instead, it should be celebrated as a thoroughly welcome refresh of a genre that has become increasingly stale in recent years. Titanfall isn’t the most unique title out there, but in the current drought of next-gen titles it’s a welcome drink of action and excitement.

Titanfall takes an interesting stance in its implementation. It is an entirely online game — buy a copy of the game without an active Internet connection and you’ve gained a $60 coaster, as Titanfall has no single-player or offline elements. Even the tutorial is hosted online, a lesson learned when I lost WiFi signal and it abruptly stopped. Titanfall‘s disc hosts the game’s assets and nothing else.

What this allows for, then, is a game that is entirely focused on being as good as it can be at online multiplayer. With no traditional, offline campaign to deal with, Respawn’s small development team instead could craft a game designed from the ground up to be an excellent multiplayer game, rather than having its online play grafted on to a normal single-player experience. Finish the tutorial and you’ll be presented with two play modes: classic and campaign. Yes, there’s a campaign, but it’s entirely non-traditional in its implementation.

Titanfall randomly assigns you to one side of a war between the business-focused IMC and the civilian army Militia, both battling for control of the Frontier — a region of planets reached by humans to establish colonies and mine for resources. Players fight through nine maps, with cutscenes, scripted cinematic sequences and dialogue and audio cues from characters introduced as you play. It’s an interesting approach to providing some backstory and depth to Titanfall‘s gameplay — offering some interesting morality to the firefights you engage in. For one playthrough I was teamed with the IMC, and as we flew in low over a battlefield before a round began, AI-controlled sentries were executing Militia civilians. It raised the question of whether I was the good guy or the bad guy in the war I was deployed into — though this is quickly forgotten as the round begins and players start fighting other players.

Classic mode is just good ol’ fashioned multiplayer. Select a game type — the usual modes are here, such as capture the flag, team deathmatch and capture the base, as well as some unique, Titan-specific options — and then jump in with 6 v. 6 battles against human opponents. There are 15 arenas in which to engage with one another, and they’re vast and detailed, offering a wealth of options for different playstyles: Get down and dirty running through tight corridors, sit back and scope in from rooftops and hills or engage in Titan action in wide spaces. There’s the potential for just 12 players in such dense arenas to feel a little sparse, but Titanfall compensates with AI-controlled sentries and grunts, which intelligently engage with the battle, offering another adversary beyond human-controlled players.

Navigating battlefields can be accomplished in one of two ways. The first is as a pilot. This is where standard multiplayer, first-person shooter veterans will feel at home, but with a few unique twists. Titanfall gives players a boosted jetpack, allowing them to run along walls, jump greater distances and climb buildings, adding a verticality and agility to gameplay missing from heavy, single-plane shooters like Call of Duty. There are a wealth of guns and secondary weapons on offer — trusty rifles, smart pistols that can select multiple targets and shoot around corners, grenades, and large cannons designed to bring down the formidable Titans. Players can opt for a variety of playstyles and watching friends and enemies leaping around arenas like heavily armored rabbits keeps gameplay fresh and exciting. Getting chased through a corridor? Jump out of a window onto a nearby building, turn around and double jump onto the roof of your building, then wait for your attacker to follow you out the window and take him out in midair. It’s a satisfying win when you’ve achieved it through such easily accomplished yet elaborate measures. 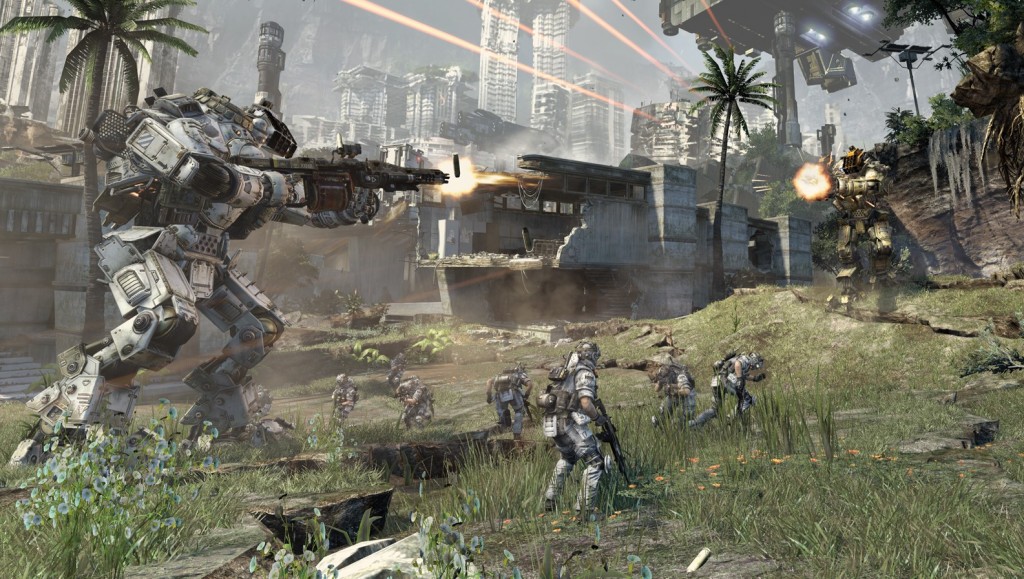 Of course, the second option in battle is the game’s namesake, the aforementioned Titans. A variation on the mech walker seen in games such as Gundam, they offer a tank-like, human-controlled suit in which to engage with battle. Titans are summoned, dropped in above, and are time-limited in their implementations to keep it fair. See the prompt telling you a Titan is ready? Hit “A” and prepare for some awesome battles. A Titan will crash to the ground in your vicinity, throwing dirt and debris into the sky, a blue shield surrounding it. Get close, hold “X” and the Titan will grab your character and throw him into the control unit inside its chest. This is where Titanfall gets really interesting. Titans are much more cumbersome than the pilots who control them, limited to standard movement with a dash ability to strafe or quickly cover distances. What they offer instead, however, is a formidable arsenal of weaponry to eviscerate opposing enemies. Turret guns, rockets, shields, electrified smoke — Titans possess a lot of ways to create havoc. The coolest option is a vortex blocker, which generates a shield in front of the Titan, temporarily blocking enemy fire. It captures any ammunition aimed at the Titan, freezing it in midair. The player can then pick a target and direct all captured, frozen rounds back at said target in a deadly barrage of gunfire.

Titans aren’t indestructible. They can be taken down by other Titans, but also by pilots. Pilots are granted a secondary, heavy weapon used to direct fire specifically at Titans. It’s not easy to single-handedly destroy a Titan, but do so and it’s a satisfying feeling. When a Titan is destroyed, the pilot inside is allowed to eject, firing into the air before falling back into battle. That time midair is both a strength and weakness: Pilots can be shot at and killed as they soar, but said pilot can also instantly gain an overhead view of the battlefield and decide their next strategy or shoot at any targets spotted as they fall. It’s not weighted in favor of the ejecting pilot, but instead adds another dimension to battles.

Titanfall plays well, with familiar, well-weighted controls for both pilots and Titans, but it also helps that it’s one of the Xbox One’s best-looking games. It isn’t as sharp or detailed as its PC counterpart, running at an unusual 1408×792, but it operates at 60 frames per second. Well, it aims for that. In battles with more than a couple of Titans and pilots on-screen, the game noticeably stutters. I found myself trapped at one point, as three Titans battled it out in front of me. As the rockets and gunfire exploded and one Titan succumbed and self-destructed, filling the screen with debris and explosion, the game ground to a near-halt. It recovered quickly, but it can somewhat distract from the gameplay. Everything else, though, looks great. For the best experience, PC is obviously the platform of choice, but Titanfall on Xbox One will still offer enough detail and quality to please anyone jumping into the console for the first time.

It’s aided by an excellent soundtrack. Militia and IMC teams are each offered their own unique soundtrack in battles, which underscore the gameplay beautifully. Layered on top are the explosions, gunfire and other sounds normally associated with such games — and they’re all detailed and immersive. Of the voice-acting that’s present, it’s well acted but evidently not intended to be distracting from simply playing the game.

My time with Titanfall has reinvigorated my usage of Xbox One. Multiplayer titles running better on PS4 had somewhat curtailed my time with Microsoft’s console, but Titanfall has drawn me back with the addictive multiplayer that endeared the Xbox 360 to so many people.Gears of War and Halo defined the last generation as great examples of multiplayer gaming in the Microsoft camp; Titanfall feels like a similar title for this generation of consoles. It’s refreshing and different enough to warrant playing, unlike the yearly releases ofBattlefield and Call of Duty. Consider the way each match ends: Rather than simply cut to a score screen like most competitors, Titanfalloffers one final chance for redemption or to stick the knife in. Once a match has ended, the losing team is assigned an extraction point, where any surviving players can be lifted from the battlefield via dropship. The winning team? They’re told where the losers are heading, and can pick them off one by one to rub salt into the wound. Or, to really crush them, wait until they’re on the dropship and use any Titans to bring it crashing to the ground. It’s another tense little burst of action after an already exciting match has ended. Kudos, Respawn, for this addition.

If you have an Xbox One, I urge you to pick up Titanfall. Given the next-gen drought, it’s likely that you already plan to. If you’re considering getting an Xbox One for Titanfall, you won’t be disappointed — though I’d caution picking up either next-gen console at the moment, simply due to the current dearth of titles. Give it six months and it’ll be a different story. Regardless, Titanfall is a very welcome addition to a market crowded with me-too first-person, multiplayer shooters. Its vertical gameplay, powerful Titans and online-only focus offer a streamlined, immersive and thoroughly enjoyable experience. Rumors that a potential sequel will come out on both Xbox One and PS4 will appease those attached to Sony’s console. For now, Microsoft fans can feel smug with the knowledge that they have the best multiplayer game of this generation. For now.