Love Is the Drug

It may get off to a slow start, but most will likely find Elixir worth the wait

For although it all eventually begins to fizz and crackle at an entertaining clip, the first few scenes vacillate between forced and tentative, like a fuse that can’t quite decide whether to stay lit. Whether it’s the dull whiffs of musical theater in the bustling villagers, the slightly confusing introduction of the young women Adina and her maid Giannetta who both look like potential love-interests for the swoony hero Nemorino, or the slow arrival of the visual wit, it’s a flattish start. With this kind of entree, it’s safe to say that those not used to waiting for their gratifications (i.e. anyone who doesn’t need glasses to read their iPhone) may break a sweat.

”The Elixir of Love”

But briefed beforehand, not just on patience but also on the challenges and quirks of mounting comic confections written for antiquarian audiences, there is much to surprise and delight a first-timer. And not least because, once things get going, Lawless and his cast work hard and successfully to give this quaint frolic a sense of contemporary humor.

Set in a barn big enough to store hay as well as serve as the village social center, this is not a ”wow” of a set, but it’s certainly gentle on the eye. And, although slightly bland, it does frame the action tightly; which is no bad thing for an opera that is small on plot but big on charm and cheer. Contrasting nicely is lighting designer Joan Sullivan-Genthe’s open sky in the big beyond, which, like much in this production, becomes more and more interesting as the day (and our evening) goes on.

Within this little universe, the plot is accessibly simple with the ”rom” being country bumpkin Nemorino’s passion for the socially superior Adina, who serves as a fine example of the flirt who doesn’t know what she’s got till it’s gone. The ”com” comes in the form of snake-oil salesman progenitor Doctor Dulcamara who convinces Nemorino that a few swigs of the Doctor’s love potion will win him the heart of Adina forever. Add the bumptious Sergeant Belcore who is determined to get a ring on Adina’s finger first, and in typical comic-opera style things go all wrong until they go all right.

A big plus for newbies here is Ailyn Perez’s souped-up Adina who offers just enough modern-girl charisma to overcome – and at times, make the most of – a significant bustle and a ubiquitous hankie. Though Adina teeters on the edge of full-blown brat, Perez saves her with some nicely played nuance: She’s young and foolhardy, not nasty. With a soprano that is richly sweet, technically accomplished, and capable of the kind of rafter-splitting notes that will thrill, she delivers some serious start power. 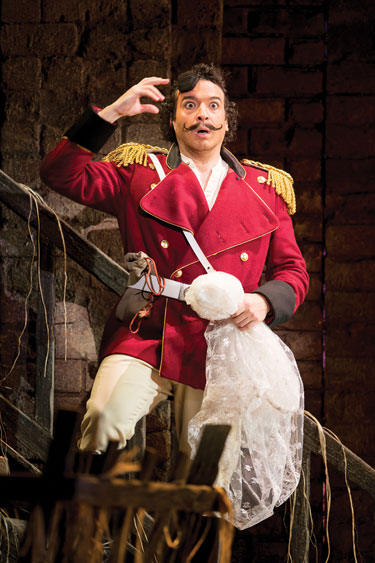 ”The Elixir of Love”

Convincingly arduous as Nemorino, (Perez’s real-life husband) Stephen Costello brings some nicely defined layers to a character easily made stock. A good physical comic, Costello captures plenty of what’s amusing about the smitten Nemorino, but he also brings out just enough inner dignity, resolve and all-around quirkiness to make him more of a match for Adina, despite his hayseed ways. An expressive tenor, Costello brings pathos to his young man, even if he can sometimes ring a little hard on the ears. His rendering of the beautifully somber aria ”Una Furtiva Lagrima” is appealingly intimate, even if the climatic pauses feel a beat too long. Having recently appeared in a much smaller role in this season’s Moby Dick, it’s gratifying to see him here, flexing his vocal and acting wings in an entirely different direction.

Bookending the plot with buffo roles, Simon Alberghini as Belcore and Nicola Ulivieri as Dulcamara, both deliver on colorful charisma and make the most of the comedic traditions as well as the more contemporary-feeling visual comedy director Lawless slips in. As the clownish womanizer Belcore, Alberghini has the right attitude despite some singing that is a tad uneven. An unusually good-looking Dulcamara, bass Ulivieri offers a nice gravitas to the rueful humor of the role and sings with a rich and dexterous flair that steals a few scenes. Though her role is small and largely mimed, mention must be made of soprano Shantelle Przybylo, whose Giannetta creates a bright presence and delights with an unexpectedly strong and pretty voice.

Thus, it’s an all-around strong ensemble and ultimately it all works and will work for a novice despite the slow start. But, if you’re mentoring, plan for a briefing on patience over the pre-performance cocktail or, better yet, tie their wrists to the chair for the first 15 minutes. It’s worth it.