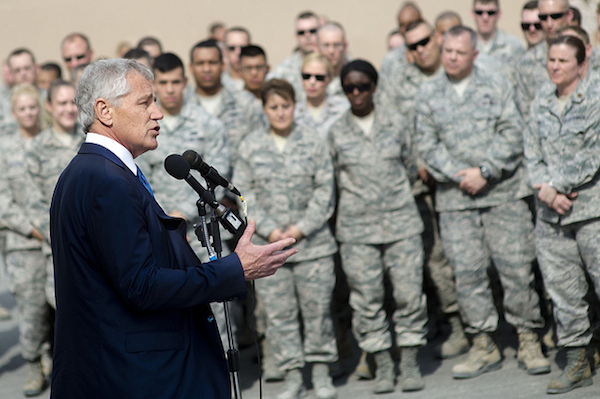 Earlier this year, a select group of active duty members of the military met at a community center in Texas. The 30 Americans represented every branch and component of military service. They were members of the Army, Navy, Air Force, Marines and Coast Guard. The vast majority had been deployed to Iraq or Afghanistan at least once, and many others had multiple deployments under their belts — some to both countries. A majority were junior enlisted and junior noncommissioned officers. But what brought them together was the same thing that cloaked their meeting in secrecy: They are all transgender.

For three days, those 30 servicemembers — who under military policy can be discharged because of their gender identity — heard each others’ stories. Many of them had never met another transgender servicemember before, let alone another trans person. In some cases, it marked the first time they had ever come out to another person. The meeting was not just an opportunity to build a network of support relationships for those forced to continue to live life in the closet while serving their country, but also to strategize. The gathering had been organized by a group of activists with decades of combined experience working on LGBT military issues who are seeking to open the armed forces to transgender service.

To be transgender in the American military is to live a life of secrets. The repeal of ”Don’t Ask, Don’t Tell” (DADT) in September 2011 brought an end to nearly two decades of discrimination that saw more than 13,000 men and women discharged because of their sexual orientation. Despite that achievement, and a consensus inside and outside the military that repeal has had no negative impact, a medical regulatory ban remains in place for those who identity as transgender. Not only is evidence of transition therapy grounds for disqualification for potential recruits, so is openly identifying as transgender. But unlike DADT, the medical regulatory ban is not a federal statue and the ability to lift it lies not with lawmakers on Capitol Hill, but leaders at the Pentagon.

The meeting, many details of which organizers have asked not be disclosed for fear participants could be identified, was born in the aftermath of the collapse of OutServe-SLDN last summer. It was in June that the board of the nation’s largest LGBT military organization ousted its executive director, Allyson Robinson. A former Army captain, Robinson had taken the reins of the organization in October 2012, making her the first transgender person to head a non-trans-specific national LGBT organization. Robinson’s departure was entangled with controversy and led the organization to bleed staff and board members resigning in protest. The financially struggling OutServe-SLDN has yet to recover.

“In the days and weeks that followed all of that, there was a group of us that really felt as though all the work we had done can’t just die. It can’t just fall by the wayside,” says Robinson. In fact, post repeal of DADT, the working assumption of many LGBT organizations had been that they would play a supporting role to OutServe-SLDN’s carrying equality in the military through its final stages.

“We came to this moment where we looked at one another and said, ‘What if we just did it? We have the connections, we have the expertise,’” Robinson says. “At that time the organization SPARTA” — Service Members, Partners, Allies For Respect and Tolerance For All — “was standing itself up and building itself around the two remaining equality goals in DoD, which are updating the regulations on transgender people serving and securing nondiscrimination and equal opportunity protections across the board. What we realized is we have a set of resources here that might allow us to accomplish something if we set our minds to it.”

And so Robinson, along with military advocates such as Sue Fulton, Brynn Tannehill, Zeke Stokes and others, looked to the successful repeal of DADT for guidance. “We knew from the lead up to the repeal of ‘Don’t Ask, Don’t Tell’ that gay and lesbian servicemembers coming together with one another and having the opportunity to build a network and to share their stories was a catalyst for what was eventually a successful effort,” Robinson says. “We wanted to do something similar and so we began planning to bring together a meeting of transgender servicemembers.”

Organizers went to the transgender chapter of SPARTA, which boasts more than 200 actively service transgender Americans, for members who indicated they wanted to be “at the tip of the spear in this fight.” With logistical and financial support from individuals, as well as organizations like the Human Rights Campaign, the National Center for Transgender Equality and the Palm Center, they were able to bring the meeting together at no personal cost to the servicemembers.

“We were able to let them know what a campaign of activism would look like if they were to undertake it,” says Stokes, who previously served as spokesman for OutServe-SLDN. “We really came away with a core group of people committed to making this happen. We came away thinking this is possible.”

“It was incredibly inspiring and educational for me,” adds Mara Keisling, executive director of the National Center for Transgender Equality, who attended the meeting. “To see such a large group of them together and to hear what open service means to them was really inspiring.”

Among the military members in attendance was Landon Wilson, a cryptologist specialist the Navy spent at least half of a million dollars to train, who also happens to be transgender. “The meeting in Texas was one of the very first places that Landon ever told his story to anyone,” recalls Robinson. In March, Wilson would be discharged after his gender identity was discovered by supervisors arranging for his promotion — a story that was recounted on the front page of The Washington Post last month. Wilson’s story in particular could prove a pivotal moment in this fight, especially with regard to the man with the power to end the ban, Defense Secretary Chuck Hagel.

“I think the fact that Landon’s story was on the front page of Chuck Hagel’s morning paper made a difference,” says Robinson. “One of the greatest qualifications Hagel brings to the job is he was an Army sergeant. A sergeant’s entire job is to take care of the troops. I think that he and others see stories like Landon’s and they recognize we’re not doing a very good job of taking care of these troops.”

Indeed, in recent days the movement has “taken a quantum leap,” says Keisling. During an interview with ABC News’ Martha Raddatz that aired May 11, Hagel said the military’s transgender ban should be “continually reviewed” and stated he is open to such a review. “I go back to the bottom line — every qualified American who wants to serve our country should have an opportunity if they fit the qualifications and can do it,” he said. “This is an area that we’ve not defined enough.”

During a flight en route to Saudi Arabia a few days later, Hagel expanded upon his remarks, stating that the Pentagon should continue to evaluate the ban. “I’ve not asked for a specific task force,” he said. “I’ve not asked for a specific study. I would want to hear more from individuals who are close to this issue, know this issue, who I would value their judgment and their direction on.” And then on May 16, the White House signaled their support for such a review. “I would certainly point you to what Secretary Hagel said and we certainly support his efforts in this area,” White House press secretary Jay Carney said in response to questions from Metro Weekly. Such statements illustrate a dramatic shift in tone by the Pentagon and Obama administration on transgender military service.

“This issue has progressed more in seven days than previously imaginable,” HRC Vice President Fred Sainz said after Carney’s remarks. “And I think the fact that it also appears that these are not off the cuff remarks made by Secretary Hagel — that clearly his thoughts, his plan is endorsed by the White House — that shows incredible momentum and strength for this issue and that is deeply, deeply meaningful.”

The publication of Wilson’s story, and the anticipated publication of more such stories in the coming months by a documentary web series titled TransMilitary, builds upon growing evidence that the military’s transgender ban is archaic. An independent commission led by a former U.S. surgeon general and retired admiral concluded in a study released by the Palm Center last March that there is no compelling medical rationale for banning transgender people from serving in the American military. According to that report, there are approximately 15,450 transgender personnel currently serving. The study is one of 11 commissioned by the Palm Center’s Transgender Military Service Initiative evaluating transgender military service as well as questions related to readiness, morale, welfare, personnel requirements and management. The initiative was launched in 2013 after a $1.35 million grant from the Tawani Foundation, which was founded by Jennifer Pritzker. A retired lieutenant colonel who served 11 years in the Army and 16 years in the National Guard, Pritzker became the world’s first transgender billionaire when she came out last September.

Many of America’s allies, including the United Kingdom, Australia and Israel, allow transgender military service. Moreover, the lifting of the ban on women in combat in January 2013 has “cleared the way forward for the military to have this conversation,” says Robinson.

“President Obama said something that I like to think was as much forward thinking as it was for that day: ‘Valor knows no gender.’ I think our leaders at the Pentagon post-Iraq, post-Afghanistan know that’s true. And that as a value and principle of DoD will help to move this ball forward,” says Robinson. (When asked if Obama believes the ban on transgender military service should eventually be lifted, Carney deflected back to Hagel’s remarks and reiterated their support for his efforts.)

No review of the ban has yet been ordered, according to a Pentagon official, but advocates are taking Hagel up on his invitation for more information from those close to this issue. According to Sainz, HRC is also working with a coalition of groups, including SPARTA, to plot an effective strategy. Telling the stories of transgender servicemembers, such as Landon Wilson, will prove critical as well, advocates say.