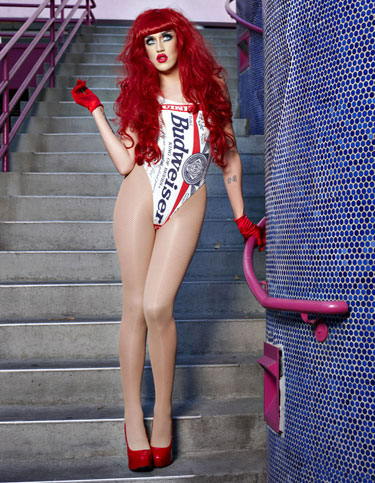 “Everything about it is just judging each other,” says Delano, specifically referring to her experiences with LA Pride. “There are kids walking down the street saying, ‘That girl is fucking ugly,’ or ‘That bitch is…’ — I’m like, do you know where you’re at, little boy? Like really? This is supposed to be a celebration and a big ‘fuck you’ back to [bullies].”

In fact, Delano’s roots originate in a desire to push back against bullies and general homophobia. “I’ve been doing makeup on myself since I was 14 years old. It’s just something that I feel liberated me,” says Danny Noriega, the 24-year-old man behind Delano. “I was bullied a lot in school. I felt like, by wearing a mask and kind of recreating myself and reinventing myself, I could tell them all to go fuck themselves!” Even his drag character’s name was inspired by a similar sense of rebelliousness: “My brother was friends with this gangster girl, who would write on walls and was named Adore,” Noriega explains. “And Delano, I looked up demonic child names and that one stood out.”

Those childhood bullies have certainly gotten their comeuppance: The youngest of five, Noriega is today’s most famous native of Azusa, Calif., which is near Los Angeles. Even before his current success as a runner-up on RuPaul’s Drag Race, Noriega achieved recognition as a semi-finalist on American Idol. He made it into the Top 16 on the show’s seventh season in 2008, when he was only 18 years old. 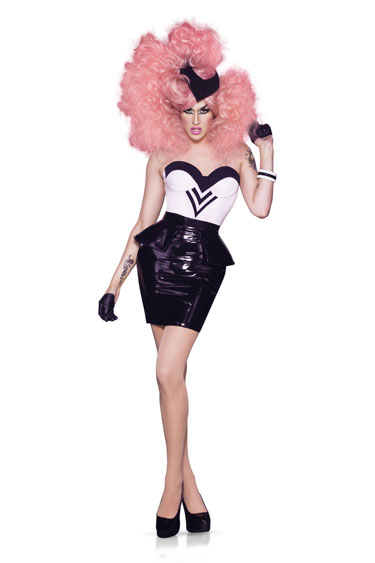 “When I first auditioned for Idol, I wanted to dress up like a girl, but my mom told me not to. So I completely got a makeover and did it as a boy.” While he didn’t compete officially as a gay contestant, Noriega says he’s been out since he was 12 years old and never hid his sexuality on the show. “I didn’t do an official statement, like Adam Lambert in a magazine,” he laughs, “but I was the gayest thing that ever graced that stage.” And he exited the stage in gay fashion too — performing “Tainted Love,” best remembered as a hit for the fey synth-pop group Soft Cell.

Aside from the “lifelong friends” he made from the show, Noriega is most grateful for Idol because “it taught me how to be comfortable in front of a camera.” The Los Angeles-based Noriega spent the years in between the two reality series fine-tuning the character of Delano, who Noriega says is based on “all the people that I looked up to, all the tragic beauties of Hollywood.”

The fame that Delano has generated via her success on Drag Race should prove more enduring than the blip of recognition Noriega got through Idol. Certainly, Delano is working to make it so. In fact, she’s already achieved something that eluded post-Idol Noriega, when talk of a debut solo album fizzled out a year or two afterwards, along with his dreams of a recording career. By contrast, Delano has already self-released her dance-pop debut Till Death Do Us Party, mere weeks after Drag Race. She’s now in full-on promotion mode, from shooting music videos to regularly performing on tour, both as a solo act and on special occasions with her fellow finalists from Drag Race.

While appearing at Capital Pride, Delano hopes everyone can try to be a little nicer to each other than they might normally. “Why are we,” she says of her fellow drag queens, “so quick to fucking judge one another when, like, you’re a man in a wig with your dick tucked between your legs as well. Like why are you judging me?”

Delano adds: “It would be nice for us to have one fucking day where everybody just chilled out and had a cocktail and made out.”

Adore performs at Town on Saturday, June 7 and at the Capital Pride Festival Mainstage on Sunday, June 8.