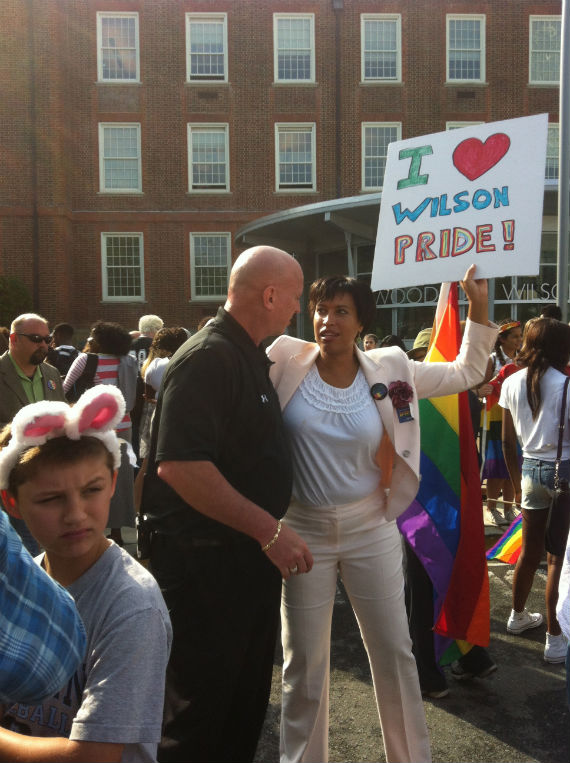 Councilmember Muriel Bowser (D-Ward 4), the Democratic Party’s mayoral nominee and presumed frontrunner to succeed Mayor Vincent Gray as the city’s top executive, secured the endorsement of the Gertrude Stein Democratic Club Monday night as she seeks to consolidate support among both the city’s LGBT community and rank-and-file Democrats while holding at bay supporters of Councilmember David Catania (I-At-Large), who is hoping to become the city’s first openly gay mayor.

The endorsement marks a huge victory for the Bowser campaign, which had struggled to gain traction among most Stein Club members prior to the April 1 primary election. At the club’s March endorsement meeting, Bowser placed fourth among all Democratic mayoral candidates on the first round of balloting. Gray, who was the top vote-getter in the first round, went into a runoff with Councilmember Jack Evans (D-Ward 2), eventually falling four votes short of the 60 percent threshold needed to secure the club’s official endorsement.

Bowser rebounded from that loss to defeat Gray by casting aspersions on the incumbent mayor amid an investigation by the Department of Justice looking into whether Gray knew about a “shadow campaign” related to his 2010 mayoral primary campaign against then-incumbent Mayor Adrian Fenty. Businessman Jeffrey Thompson, a Gray associate, had pleaded guilty in March to illegally funneling campaign contributions to Gray and other local and federal candidates, and alleged that Gray knew of the shadow campaign.

By backing Bowser, the Stein Club also dealt a symbolic blow to Catania, whose chances of becoming mayor rely heavily on his ability to sway disgruntled supporters of other Democratic candidates, such as Gray, Evans, and Councilmember Tommy Wells (D-Ward 6), to support his candidacy. As one of only two openly gay members to ever serve on the D.C. Council, Catania had also hoped to gain a foothold among the District’s LGBT voters. While an endorsement of Catania by the Stein Club was never a possibility due to his party affiliation, some of his supporters had hoped they could at least deny Bowser the 60 percent needed for the nod.

Earlier in the day, Catania’s campaign received more bad news when former Councilmember Carol Schwartz (R-At-Large), who has previously run for mayor four other times – in 1986, 1994, 1998 and 2002 – announced she was entering the mayoral race as an independent, potentially siphoning off some voters that would have otherwise backed Catania. Although Catania’s campaign cried foul, alleging that Schwartz is a plant by the Bowser campaign to detract from Catania’s support in the same way that former mayoral candidate Sulaimon Brown is alleged to have been promoted by Gray supporters to detract from Fenty’s 2010 re-election bid, both Bowser and Schwartz have denied any coordination. Following the Stein Club meeting, Bowser told reporters she had last run into Schwartz at a barbecue but said that neither of them had discussed their political futures.

Monday’s Stein Club meeting was split into two parts: the first, a town hall-style meeting where Democratic candidates for various offices on the November ballot were invited to answer audience questions, and the second, a regular meeting where members were given the chance to decide whether they wanted to endorse the Democratic slate of candidates. Previously, the club had decided to endorse Council Chairman Phil Mendelson (D), Councilmembers Mary Cheh (D-Ward 3) and Kenyan McDuffie (D-Ward 5), U.S. Del. Eleanor Holmes Norton (D-D.C.) and candidate for Shadow U.S. Representative Franklin Garcia.

The town hall portion featured Bowser, Ward 1 Council candidate Brianne Nadeau, and Ward 6 Council candidate Charles Allen, who answered a variety of questions about their positions on LGBT issues, education, taxes, and other concerns. Angela Peoples, the president of Stein, said invitations had been extended to all Democrats – both those endorsed and those not endorsed – but that many candidates had scheduling conflicts.

During the regular meeting session, longtime transgender activist Jeri Hughes made a motion to have the club endorse the full slate of Democrats for November’s election – which would have expanded the club’s endorsement to include Bowser, Nadeau, Allen, Shadow U.S. Senator Paul Strauss, and Councilmember Anita Bonds (D-At-Large), all of whom had fallen short at the March endorsement meeting. While most of the room was stacked with Bowser supporters – several openly displaying her trademark yellow-and-green campaign stickers on their lapels – a group of about six members opposed Hughes’s motion and tried to raise various procedural concerns and parliamentary inquiries to delay the vote on an endorsement to a future date, citing the club’s bylaws.

For the next half hour, those opposing the endorsement raised various issues, including whether Hughes’s motion was proper, whether the club had failed to provide sufficient notice prior to an endorsement vote, and whether the club was required to endorse specific individual candidates. Peoples ruled against the six, which included some prominent Catania backers, explaining that, in her interpretation, Hughes’s motion remained valid under the bylaws and that the club was not required to provide 30 days of notice prior to an endorsement vote, although it does require an individual member to have been registered for 30 days prior to voting in an endorsement forum.

Although the opponents appealed her rulings, the majority of those present voted to uphold them. Eventually, Hughes’s motion was considered – along with a friendly amendment that listed each of the Democrats individually instead of a generic endorsement of the slate – with members voting 35-8 in favor of the proposal. There were two abstentions, two blank ballots, and one spoiled ballot. As a result, all the candidates received 73 percent of the votes of Stein Club members.

Following the final vote to endorse the candidates, Paul Kuntzler, one of the club’s original founders and a Catania supporter, left the room angrily, saying, “I just want to say…in the minds of about 80 percent of gay and lesbian voters in the District of Columbia, the decisions made tonight are irrelevant. This club is irrelevant.”

Kuntzler’s comments reflect an ongoing debate – voiced by many in one-on-one conversations held prior to and during the candidate forum and meeting – over the role of Stein and the scope of its influence within the party and within the city. On one hand, prior to the endorsement, the club was potentially facing being seen as irrelevant to Democratic activists who feel the District’s top LGBT political club should back the party’s nominee out of loyalty to the party’s values. On the other, the club also faced being seen as simply a rubber-stamp for the party, thereby losing its degree of independence and – in the eyes of detractors – its ability to effectively pressure elected officials to stand up for LGBT issues.

Peoples had previously referenced many of those concerns, prior to any debate over the endorsement, in her remarks at the opening of the regular meeting session.

“The Stein Club is an LGBT Democratic organization with a mission to elect LGBT-allied Democrats,” she said. “We are an organization that has played an important role in LGBT-related legislation, and has earned a reputation for uplifting our allies in the Wilson Building, but also for holding those accountable who do not live up to and share our values.

“We have an opportunity to build upon our organizational considerations and our organizational goals, and, in our current position, to push for more progressive policies and for more accountability in the Wilson Building and for those who support us,” she continued. “Our goal as an LGBT Democrat organization is to push our party and to push our elected officials on LGBT issues and issues that are important to our community. But we must elect Democrats to office first…It is my position, as is the position of the Executive Committee, that it is vital for the Stein Club Democrats to do all that we can to elect Democrats in November. A vote to endorse the 2014 Democratic ticket is an important step in that process.”

Both Bowser and Peoples denied that there was any pressure placed on Stein’s Executive Committee by the Democratic State Committee to steer the meeting towards an endorsement of Bowser’s candidacy.

After the meeting, while Bowser and her supporters celebrated, the candidate dismissed those voting against the endorsement as a minority with a particular view, saying, “They expressed that view, they were heard by the chair, and the members voted. I support the club’s decision to take a vote. It’s been my position that I’m the only Democratic candidate running for mayor, and the Gertrude Stein Democratic Club endorses Democrats.”

Peoples acknowledged that there was some contention among some of the members but said she expected it, calling the discussion over whether to endorse “healthy” and “necessary for the club to have.” She also said she did not foresee any legal action on the part of those angered by the endorsement.

“I have led this organization under a vein of transparency, and trying to be as inclusive as possible, and I knew that folks wanted to have a discussion, that they wanted to have a little of this back-and-forth out,” Peoples told Metro Weekly. “And I think we were able to do that today. And it’s a different kind of club. The Stein Club loves our process, we love our policies, but at the end of the day, I think we will be united, and the club will be healthier for it.”

John Riley is the local news reporter for Metro Weekly. He can be reached at jriley@metroweekly.com
← Previous Story Efforts to Repeal Maryland Trans Bill Fall Short
Next Story → This weekend’s Baltimore Pride celebrates in a new, larger location